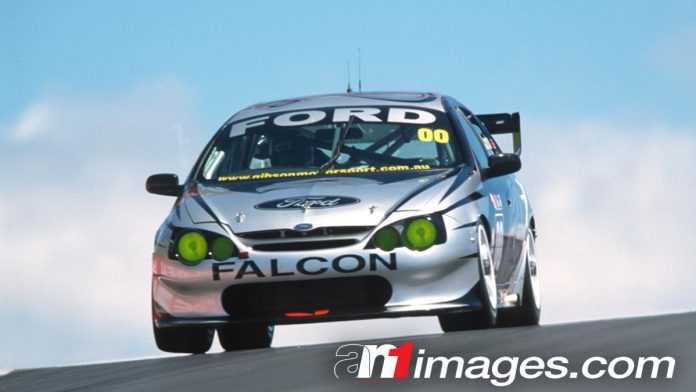 DEBUTING over 20 years ago, the AU is perhaps the most maligned racing Falcon of all-time, chastised for its poor results and unique appearance.

While the former can’t be argued with, we at V8 Sleuth reckon the AU was a good-looking race car… with the right livery on it.

So, what better topic to debut our new ‘Top Five’ segment with than a look at the five toughest-looking AU Falcon V8 Supercars?

We start with a left-field pick – the Budweiser Racing livery that made precisely one race start in its entire life!

The Bud AU was built and run by Nations Cup Ferrari squad Prancing Horse Racing, which made a short-lived expansion into V8 Supercars for the 2001 Bathurst 1000.

Craig Baird and Mark Noske shared the driving duties and, while it failed to trouble the scoreboard, the red and white scheme sure looked the part.

It was simple, but boy it looked tough!

John Bowe’s switch from Dick Johnson Racing to the new CAT Racing in 1999 brought a fresh look to the V8 Supercar grid.

The black and yellow of Caterpillar sat nicely on the AU, matched perfectly by a lick of flame out the exhaust – shown here at Queensland Raceway, where JB scored pole and a race win.

Having run a very corporate and conservative plain blue scheme in its first year, Ford Tickford Racing knocked it up a notch in 2000.

It is perhaps the world’s most famous AU too, thanks to an appearance in the Gran Turismo Playstation title. Over 40 million copies featuring the car were sold!

This car also features in our new book, ‘Seto: The official racing history of Glenn Seton’, available now through the V8 Sleuth Bookshop.

Pirtek was the primary sponsor of SBR’s #4 entry throughout the four-year AU era, fielding Jason Bright, Craig Baird and then Marcos Ambrose.

While the scheme used for the bulk of the first three seasons looked tidy, an update for Bathurst 2001 visually took this car to a new level.

It scored pole in Ambrose’s hands that weekend and the revised livery was retained for 2002, where the blue Ford grew increasingly competitive.

Craig Lowndes’ defection to Ford in 2001 came in a sleek silver and black coloured AU Falcon, with primary backing from the manufacturer.

The introduction of a new car for Bathurst came with it a revised look, retaining those colours but adding the distinctive ‘green eye’ headlight covers.

It was an instant classic, giving the AU Falcon a much-needed menacing touch. The livery continued throughout 2002, when the team ran under the 00 Motorsport banner.