Home News TRANS AM TO SUPPORT SUPERCARS IN SYDNEY 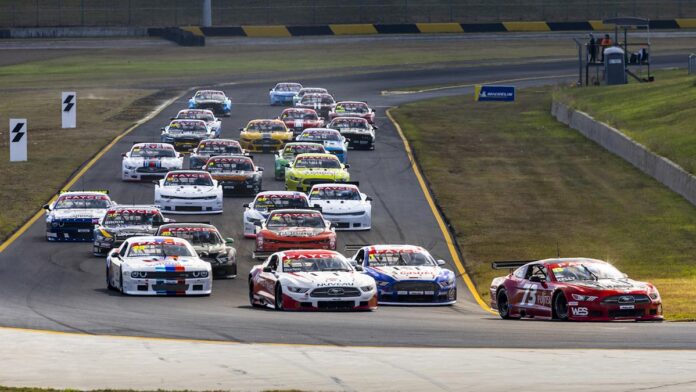 The National Trans Am Series will return to the race track on November 20-21, supporting the Supercars SuperNight event at Sydney Motorsport Park.

That is the last of the upcoming four Sydney Supercars events, which will also be supported by the Dunlop Super2/Super3 Series, S5000 Tasman Series and Toyota 86 Racing Series.

Up to 30 of the V8-powered Ford Mustang, Chevrolet Camaro and Dodge Challenger Trans Am cars will converge on the Sydney venue, almost seven months after their previous round.

The event will be the fifth round of the 2021 Trans Am series following events at Symmons Plains, Phillip Island, Bathurst and Sydney between January and May.

The sixth and final round will be held at Mount Panorama where it will form part of the six-day Repco Bathurst 1000 from November 30-December 5.

Ford driver Aaron Seton, who also competes in Super2, currently leads the series by a mere four points over Dodge driver Herne and a trio of Mustangs in Edan Thornburrow, Tim Brook and Hugh McAlister.

The National Trans Am will use its regular format in Sydney, comprising of practice and qualifying sessions before three 11 lap races across the three-day meeting.

“It’s exciting to have the National Trans Am Series restart after the frustrations of border closures,” said category manager Liam Curkpatrick.

“Our competitors have been very eager to get back out on track, and as soon as we were able to offer this opportunity at Sydney Motorsport Park, there were no complaints.

“To be back racing again will be exciting. We can’t wait for National Trans Am to resume ahead of what promises to be a tight conclusion to the title at Bathurst.”