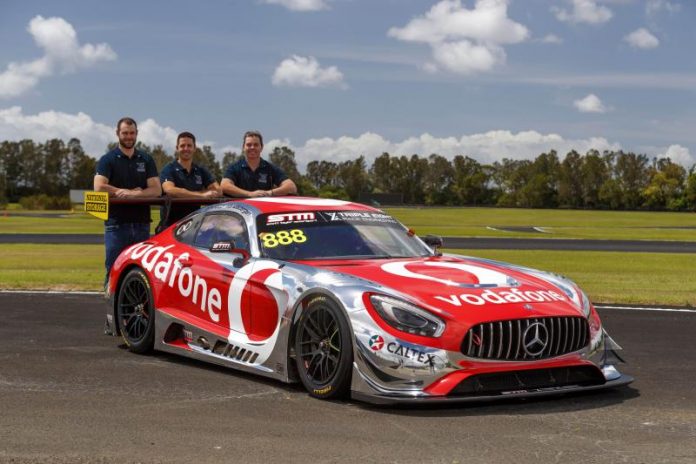 TRIPLE Eight Race Engineering join forces with ScottTaylor Motorsport to tackle the Liqui-Moly Bathurst 12 Hour for the first time in 2019, pairing Craig Lowndes, Jamie Whincup and Shane van Gisbergen together in a Mercedes.

The three Supercars heavyweights will race a car together for the first time, Lowndes and Whincup reuniting for their first race together since the 2017 Bathurst 12 Hour.

Adding to the throwback flavour, the Mercedes GT3 they will race will bear the #888 and carry primary sponsorship from Vodafone.

“It’s sort of like the old rat pack back together again, although we’ve got Shane on board,” Lowndes said.

“The car has lots of memories of when we had Vodafone on the supercar, but it’s great to see the old colours back, great memories for that era. Hopefully the three of us can do Vodafone, Scott Taylor Motorsport and Triple Eight very proud.

“It’s going to be nice, obviously the three of us are very well compatible and we know the circuit very well. To have all three of us in one car is very strong. The car for me, I’ll need to get my head around it, but I’m sure that’ll come pretty quickly.”

Triple Eight’s last major official presence at the 12 Hour was in 2017, when Whincup, Lowndes and factory Ferrari GT star Toni Vilander won for a Maranello Motorsports effort featuring engineers and mechanics seconded from the Supercars squad.

All three Triple Eight pilots have won the 12 Hour in the past but Whincup was their best finisher in last year’s race, claiming second place with Kenny Habul, Tristan Vautier and Raffaele Marciello in a Mercedes run by STM.

“To team up with Scott Taylor Motorsport again and then combine that with Triple Eight Race Engineering, then to have both my teammates in the car as well, combine that with Vodafone on board, it’s fantastic. I’m really looking forward to next year’s event,” Whincup said.

“Lowndesy and I and Team Vodafone competed at Bathurst for many years, so it’s good to get the band back together. I’m looking forward to teaming up with Lowndesy again, but both years Shane has been opposition for me, so it’s good to be in the same team for an all-out assault.

“All the elements are there for a good show, but I’m just looking forward to bringing all that good that Triple Eight has, STM do a fantastic job and combining all that, we’re confident we can do a good job.”

Van Gisbergen won the event in 2016, setting a record pole position time along the way, and battled Whincup for victory in an intense finish to the 2017 race.

“It’s amazing to team up with these guys. Working alongside them in the race team has been awesome, but getting to drive with them will be a pretty special moment for me,” van Gisbergen said.

“I think every year the event gets bigger and bigger. More European teams and drivers come out, more Australian Supercars guys jump in it too and it just seems to get tougher and tougher every year and the fans support that. Hopefully it’s an even bigger race next year and we can put on a good show.”

The 2019 Liqui-Moly Bathurst 12 Hour takes place at Mount Panorama from January 31 to February 3.