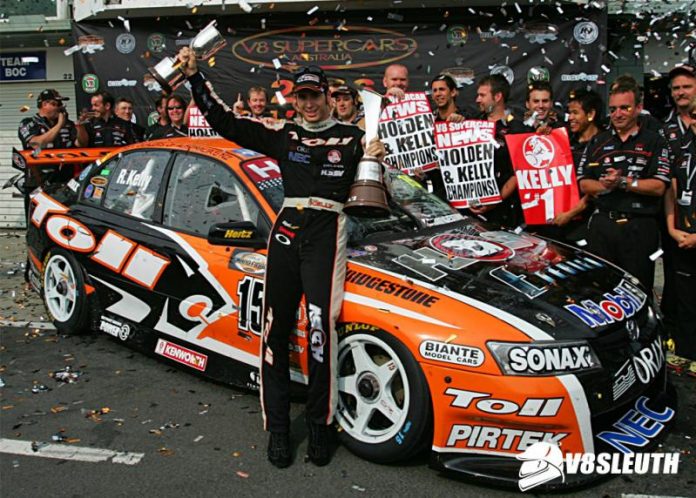 A V8 SUPERCARS Championship-winning Commodore in the middle of one of the most controversial finishes in title history is the first car confirmed for August’s Kumho Tyre V8 Sleuth Touring Car Classic at Winton Motor Raceway.

Now owned by Eggleston Motorsport, the Toll HSV Dealer Team Commodore VZ that won the 2006 championship in the hands of Rick Kelly after a drama-packed final round at Phillip Island will be on the grid for the Classic as part of the CAMS Shannons Nationals.

To be driven by Ben Eggleston in its original orange and black Toll HSV livery, the car holds a special place in Supercars history as being the only car to win the main Supercars Championship (with Kelly), the Development Series (with Tony D’Alberto in 2007) and the third-tier Kumho Series (with Justin Ruggier and EMS in 2014).

ELIGIBLE CARS: What you can run in the Kumho Tyre V8 Sleuth Touring Car Classic

The car is the first to enter for the inaugural event, which recently announced Kumho Tyre as its naming rights sponsor and control tyre supplier.

Eggleston is the co-owner of Super2 Series-winning team Eggelston Motorsport and has history as a driver in both the Super2 Series and Kumho V8 Touring Car Series, though his appearance in the Classic is his return to race driving after a few years out of the saddle.

“When this event was announced I think I was probably one of the first people on the phone to find out more information,” says Eggleston.

“There’s huge interest in the 1990s and early to mid 2000s V8 Supercars and it’s a period of the sport I have very fond memories of.

“The team behind the event have the same passion and vision that I do for getting these cars out onto the track for the fans to enjoy, so I’m really happy to support them and bring the Toll car out for a run – it’s going to be a great weekend.”