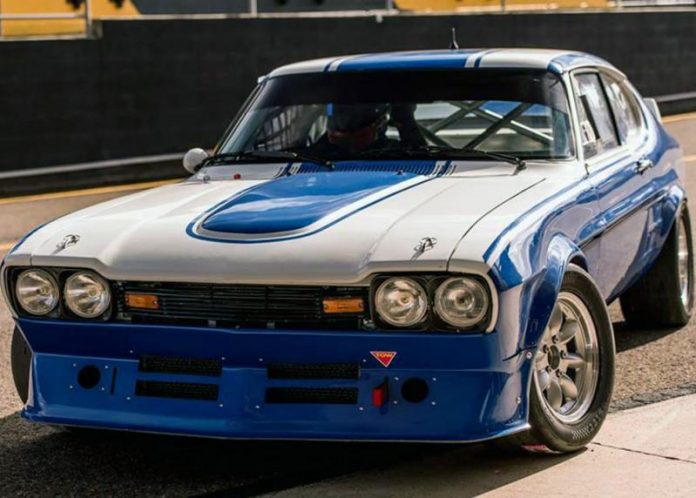 JEREMY Gray will debut a new Touring Car Masters-spec Ford Capri Perana at the category’s Phillip Island round next weekend.

A former V8 Ute, production car and GT racer, Gray made his TCM debut at the Adelaide 500 aboard the Holden Torana that Ryan Hansford campaigned in 2018 while waiting for his new machine to be ready.

“After racing in GT4 with Andrew last year he and I got talking about it. I wasn’t keen on doing GT any more and have always loved TCM so I asked if he’d be willing to part with the car.

“We got the car in November and stripped it to put into TCM specification. We changed brakes fuel cell, gearbox and the engine to make it legal for TCM but the car, as it looks, stays the same. It looks so good.”

Only the second Capri Perana to race in TCM, Gray’s is unique in that it is fitted with the new TCM ‘category engine’.

Based on a six-litre Chevrolet LS V8 block, the 600 horsepower mill is available to competitors running V8-powered cars for under $25,000. The Torana that Gray raced in Adelaide was fitted with the TCM category engine.

“It’s quite impressive. (In the Torana) at Adelaide even when I was in behind Bowe he didn’t have any more horsepower than me,” he said.

“It looks really good. The guys at Fataz (who are supplying the TCM category engine) in Queensland have got the engine in and have had it on the Dyno running properly.”

The second round of the 2019 Paynter Dixon Touring Car Masters features on the support card of the WD-40 Phillip Island SuperSprint from April 12-14.