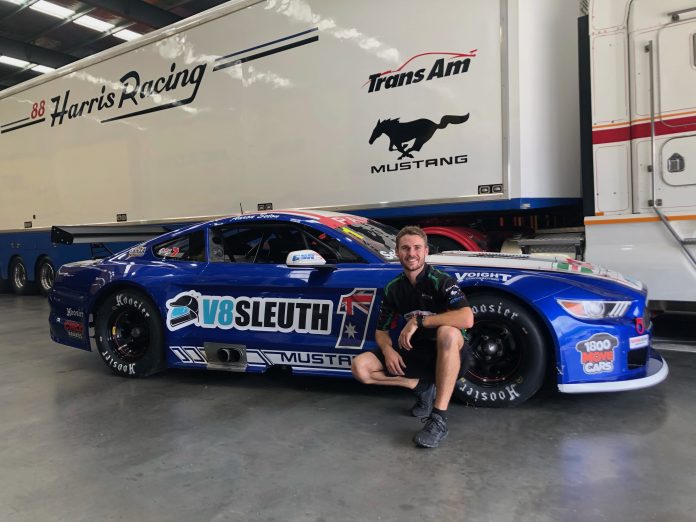 NATIONAL Trans Am Series star Aaron Seton will have the backing of leading Aussie motorsport website V8 Sleuth for this weekend’s second round of the series at Phillip Island’s Grand Prix Circuit.

The winner of the recent $10,000-to-win Baskerville non-points event in Tasmania, Seton drives the #1 Ford Mustang run by Harris Racing.

He currently sits second in the Trans Am Series after the opening round at Symmons Plains in January, just four points behind series leader Nathan Herne.

The son of two-time Australian Touring Car Champion Glenn Seton, Aaron has a busy year ahead of him with his Trans Am program dovetailing with a drive in the Dunlop Super2 Series in a Matt Stone Racing Commodore VF.

V8 Sleuth, the online authority of Australian motorsport, is the brainchild of Aaron Noonan with a website, podcast and ever-growing social media accounts providing a range of engaging content for motorsport fans across multiple platforms.

“I watched the first round of the Trans Am Series from Symmons Plains on TV and saw the big space down the side of Aaron’s car, so I thought I’d do something about it for the next round,” says Noonan, who last year published a book documenting the career of Aaron’s Hall of Famer father, Glenn, available here on the V8 Sleuth Online Bookshop.

“He’s a great kid who works unbelievably hard at his craft and hasn’t had a silver spoon in his mouth.

“We’re thrilled to be able to be involved with him for this weekend’s round at Phillip Island.”

Support of Seton is the latest example of V8 Sleuth helping the career of a young, promising star of the future.

In the past the business has been able to make small contributions to the development racing programs of drivers including Cam Waters, Will Brown and Thomas Randle – all three are either now full-time Supercars drivers or signed to a Supercar team for the Bathurst 1000.

“We’ve had a really busy start to the year with the Trans Am racing and Super2 testing and racing as well,” says Seton.

“It’s great to have Aaron and his V8 Sleuth team on board with us this weekend. The Sleuth brand is all about the history and heritage of motorsport and I am trying to write my own chapter of Seton racing history, so there’s a nice, natural connection there.

“The Trans Am Series field is getting more and more competitive every weekend, so we’ll have our work cut out for us this weekend.”

The Trans Am cars will compete in three races this weekend at Phillip Island, each covered on 7plus and 7mate.

There will be two races on Saturday (each of 11 laps) and a final 13 lapper on Sunday.