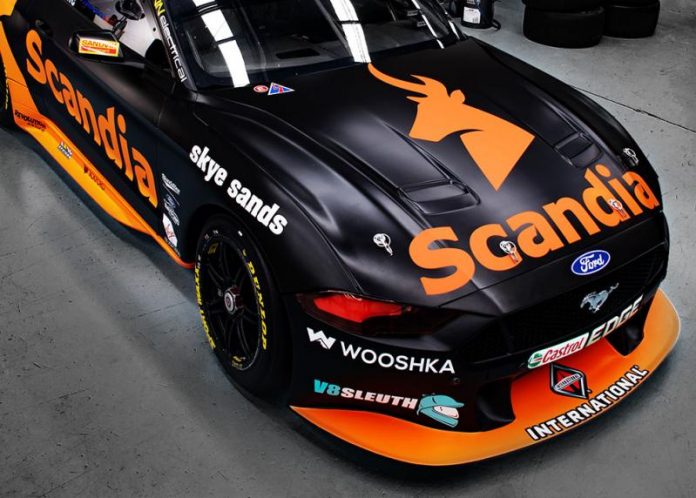 V8 Sleuth will be on board with Thomas Randle as the young gun makes his Supercars Championship debut as a wildcard at next weekend’s OTR SuperSprint.

Randle, who scored a breakthrough Super2 Series win at the most recent round at Queensland Raceway, will pilot a fifth Tickford Racing entry at The Bend.

The black and orange Ford Mustang GT will carry primary sponsorship from Scandia, manufacturers of wood and gas fire stoves, and will also wear the distinctive V8 Sleuth logos on its front bumper and tail.

Randle is the latest in a line of rising stars to carry the V8 Sleuth colours, the Tickford ace joining Supercars race winners Chaz Mostert and Cameron Waters and fellow Super2 star Will Brown.

“At V8 Sleuth we love honouring our sport’s history, but we also enjoy celebrating its present and its future,” V8 Sleuth MD Aaron Noonan said.

“Thomas has shown plenty of promise since making the move from Sports Sedans to Super2, and we’re proud to join him as he takes his next big step into the main game.”

Randle added: “It’s just like being drafted from the VFL up to the AFL for a match, so it’s a real dream come true.

“It’s been a dream of mine since I was a kid to race in Supercars, and it’s going to be super awesome to finally drive a Mustang Supercar on my own for a round at Tailem Bend in less than a fortnight.”

Randle’s Mustang will carry the #66, which sees him follow in the footsteps of several of the sport’s biggest names.

The last full-time driver to race under the number was Russell Ingall in 2013, while Marcos Ambrose made his return to Supercars in 2014 with the number. It last appeared on the Supercars Championship grid in 2015, when Fabian Coulthard and Luke Youlden ran a Team Penske retro livery for the Sandown 500.