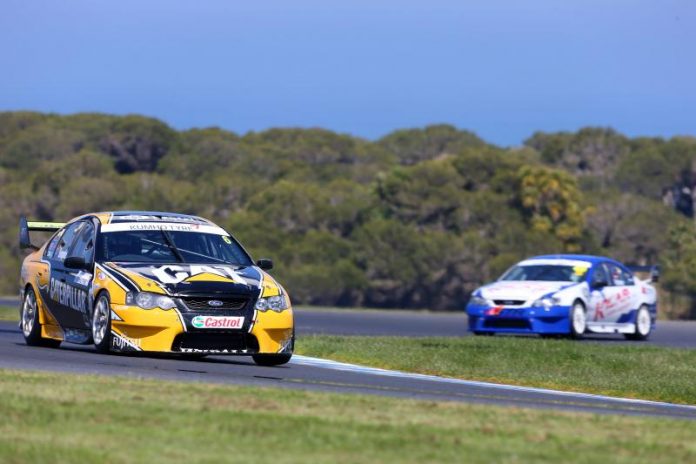 THE KUMHO TYRE Australian V8 Touring Car Series is pleased to confirm an expanded relationship with the V8 Sleuth ahead of the 2016 season.

The company’s V8 Sleuth branding will appear on every Kumho Series car this year and the organisation’s extensive online archives, charting the history and racing lives of every V8 Supercar ever built, will help detail some of the remarkable cars competing in the series.

The Kumho V8 Touring Cars is a home for ex-V8 Supercars dating to the end of the 2013 season – prior to the introduction of the Car of the Future.

This year, VE Holden Commodores and FG Ford Falcons will be eligible for the series for the first time.

AN1 Data, also headed up by noted motorsport statistician and broadcaster Aaron Noonan, will also continue to maintain the series’ record book and statistics throughout the season.

“We’ve had a long, fruitful relationship with the Kumho Series and have taken great pride in helping it grow in recent years,” says Noonan.

“For many years we have documented and recorded the histories of over 400 V8 Supercars and remain the industry-leading premium resource and authority on this important part of racing history – it’s an important pillar upon which the V8 Touring Car category is based.

“In essence the category has become a third rung on the V8 racing ladder and this year’s calendar, paired with the eligibility of more cars, means we’re in for a really great season.”

The Kumho Series features a mix of competitive Holden versus Ford Touring Car racing while also maintaining a heritage aspect to the competition.

Several cars racing in the series have remarkable histories – with several former V8 Supercar race and round winners amongst the grid.

As well as being a home for ex-V8 Supercars, the category has also developed into an ideal training ground for young drivers looking to progress their careers into the ‘main game’.

Young gun Liam McAdam won the 2015 Kumho Series and will progress into the Dunlop V8 Supercar series with Eggleston Motorsport this year.

Alex Rullo, then 14, became the youngest ever winner of an Australian Touring Car race when he won the Winton round of the Kumho Series last June.

He has since been snapped up by main-game outfit Lucas Dumbrell Motorsport to contest the Dunlop Series this year.

The expanded relationship with the V8 Sleuth is a bonus for the category as it heads into what could be its biggest ever year – two V8 Supercar rounds (at Winton and Queensland Raceway) and a feature spot on the Muscle Car Masters program making up a large portion of the five-round calendar.

The V8 Supercar rounds will include live coverage on FOX Sports, the Shannons Nationals rounds on SBS Speedweek and Muscle Car Masters in a specialty highlights program to be shown on 7mate following the event