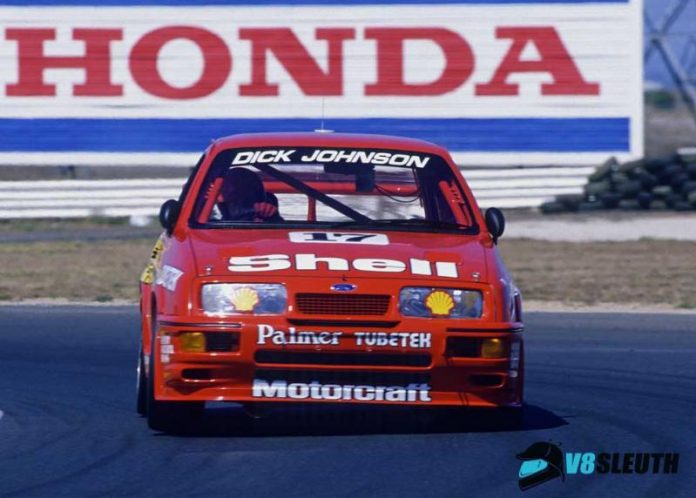 TODAY, August 1, marks three decades since the birth of the car that changed the face of Group A touring car racing.

On this day in 1987, the Ford Sierra Cosworth RS500 evolution model was homologated by the FIA. The three-door hatch was notoriously fragile in RS trim, but a bigger turbo headlined an upgrade that allowed the two-litre motor to reliably pump upwards of 550bhp through the car’s nine-inch rear tyres.

It swept all before it in Australia, dominating the 1988 and 1989 seasons and remaining competitive until the end of Group A in 1992.

On the day of its 30th birthday, we look over Australian racing’s five most important RS500s.

This is the car that made the world take Australian touring car racing seriously.

The European Sierras had wiped the floor with their Australian counterparts at Bathurst in 1987, spurring Dick Johnson Racing into an intense development program.

Learning how to program the Bosch engine management system themselves, plus fuel development from Shell, allowed DJR to generate big horsepower without blowing the motors to pieces.

The fruit of their labour was the Shell cars’ annihilation of the 1988 ATCC, won in a canter by Johnson in DJR3, before the car was shipped to England for the Silverstone TT ETCC round. Johnson trounced the more fancied Eggenberger and Rouse cars to take pole position at a horsepower track.

A failed water pump while he and John Bowe fought for the lead on race day hardly dampened the message: the world’s fastest Sierra hailed from the land down under.

There’s an argument to be made that the last lingering question over the Peter Brock legend was answered aboard this Ford.

From 1978 onwards, Peter Perfect had enjoyed the best of everything from Holden. That plug was unceremoniously pulled at the start of 1987; though he would famously win Bathurst that year.

A year in BMW’s M3 saw him often play second fiddle to teammate Jim Richards in a battle waged well off the pace of the turbo Fords – so he went and bought one of his own for 1989.

In Brock’s second race in the Rouse-sourced Ford he took pole position – his first since the 1986 Sandown 500. By the end of the ATCC he had won his first solo race (at Oran Park) in over three years.

In downing Johnson, the renowned king of Sierras, Brock proved for the first time in a decade that he was still as good as anyone in equal machinery.

The only car to take the fight to the visiting Sierras at Bathurst in 1987 would serve as Andrew Miedecke’s car throughout a woefully-underfunded 1988 ATCC campaign, one which saw him as the only Sierra runner to regularly hold a candle to the Shell cars’ speed.

New backing from Kenwood, Yokohama and Blast Dynamics augured for a better 1989 – only for the car to be comprehensively destroyed in an infamous fiery crash at Lakeside that year.

Part of the car’s magic came from a duo recently inducted into the Supercars Hall of Fame: the Stone Brothers. Ross and Jimmy were recruited by Miedecke to engineer his team’s Sierras.

The Stones would each also work for Kevin Waldock and Tony Longhurst before pairing again at Dick Johnson Racing in 1992, beginning a run of success that would culminate with their own team, Stone Brothers Racing, becoming a dominant force in the Supercars Championship.

This was one of the most-raced Australian Sierras, racking up 81 race starts across five seasons of competition, and was one of a few of the turbocharged rockets to regularly feature across all of the ATCC, AMSCAR, endurance and Grand Prix support races of the era.

The car was Bond’s mount for the final two ATCC race wins of his career at Lakeside and Mallala in 1990, and he was one of four drivers in with a shot at the ’90 title at the final round. Formula 1 World Champion Alan Jones also took his first podium finish at the Bathurst 1000 in the car, partnering Bond to finish third in 1988.

Bond’s Sierras were among the first racecars anywhere to use a MoTec engine management system. The Australian-designed electronics are now commonly used in motorsport around the world and are the control ECU of Supercars’ Car of the Future, but took their first trip to the Bathurst podium installed in this Caltex Sierra.

The pristine blue machine, its red and yellow bands edged with mirror-gold pinstripes, was certainly one of the prettiest Sierras to grace a grid. Indeed, it won the Dulux Best Presented Car award at the Lakeside ATCC round in 1989 – just 30 minutes before it was destroyed in a nasty four-car crash.

At just 23 years of age, Seton stepped out from under the Nissan umbrella to start his own team with father Bo. That first Glenn Seton Racing Sierra, built from an Andy Rouse-supplied kit, sits at the head of an unbroken lineage through to the current Supercars grid.

Though Seton won just a handful of races in Sierras, he claimed two ATCC titles in the V8 era before GSR was bought out by Prodrive in 2003 to create the team we know today as Prodrive Racing Australia.