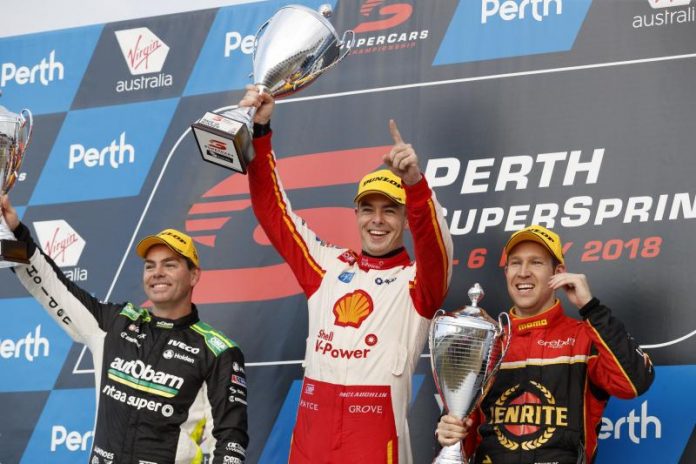 Scott McLaughlin won from 19th on the grid in Perth last weekend, but how does it rate in the great fight backs of all time in championship history?

SCOTT McLaughlin’s victory last Sunday at Barbagallo was an impressive display of race-craft, strategy and speed after the Kiwi came from 19th on the grid to take a commanding win in the 83-lap encounter.

As impressive a performance as it was, just where does it rate in terms of victories deep on the grid in the history of the Virgin Australia Supercars Championship?

Would you believe it’s only the seventh best on the list in ATCC/VASC history?

Here’s the top five, most of which are unlikely to ever be topped given the field sizes in the modern championship.

The Holden Racing Team driver suffered engine dramas early in the opening race on Saturday that left him last on the grid for Sunday’s 250-kilometre race.

A mix of rain, Safety Car periods and accidents made for a tough race that Skaife navigated perfectly (even included a drive-through penalty for speeding in pit lane!) to take the victory and begin his charge to championship victory that year.

The ’06 season featured reverse grid second races at many of the rounds before they were eventually ditched.

Gearbox issues sidelined Skaife in Race 1 so he started down the back in Race 2 (non-finishers weren’t able to take advantage of the grid inversion) and even had an opening lap spin before gathering it up and carving through the field to take an impressive victory.

Bizarre is the best way to describe Besnard’s one and only win for WPS Racing.

A Safety Car mix-up caused World War 3 in pit lane with teams, officials and rule books with Greg Murphy crossing the line to win, only for an enquiry a week after the race declaring ‘Bezzy’ the winner!

The 2014 Supercheap Auto Bathurst 1000 was one of the most eventful and action-packed in the Great Race’s history and featured another last-to-first drive.

A gripping last lap pass on the running-on-vapour Jamie Whincup saw the duo become the first to ever win Bathurst from last on the grid, only leading the last lap in the process!

After half the field tasted concrete when the rain arrived, Webb navigated the tricky conditions perfectly to taste victory for the first time in the category.

Can you think of any other performances that aren’t in the top five?