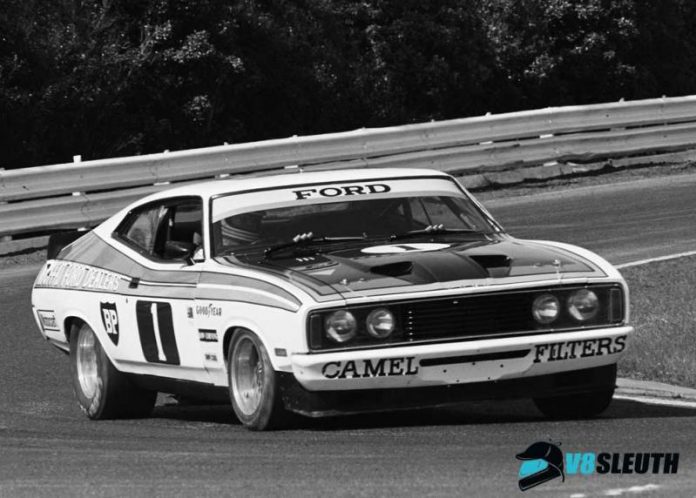 Ford fans love their Falcons and so do we, as we name our top 5 Falcons of all-time …

THIS year is an important one for Ford fans and their love of the mighty V8 Falcon.

After all, it’s 50 years this year since Falcon won its first Bathurst in the hands of the late Harry Firth and Fred Gibson, their Ford Motor Company-entered, Firth-prepared XR GT leading home the similar car of brothers Ian and Leo Geoghegan after a lap scoring bungle.

And it’s 40 years since the famous 1-2 form finish of Allan Moffat and Colin Bond in 1977, their pair of XC Hardtops crushing the hearts of Holden fans in a victory so emphatic it still causes anguish for Torana fans all these years later.

So, what are the top five Falcon race cars of all time?

The V8 Sleuth Aaron Noonan spent some time pondering and has come up with his list.

Do you agree or disagree?

1. Allan Moffat’s 1977 Bathurst-winning XC Falcon
Built new for the 1976 Bathurst race to replace a car destroyed in a fire, this car gave Moffat and Ford its greatest moment at Mount Panorama. Updated to XC spec during its championship-winning ’77 season, it later raced on in Moffat’s hands in 1978 and 1979, but the mighty Hardtop is our #1 Falcon of all-time.

2. Dick Johnson’s Tru-Blu XD Falcon
This was the car built largely from public donations after Dick’s famous encounter with a rock at Bathurst. It won Johnson his first Australian Touring Car Championship in 1981, took he and John French to victory at Bathurst that October and then defended the title in 1982. Indeed a special Falcon.

3. Ian Geoghegan’s ‘Super’ Falcon
One of only two GT-HO Falcons built as ‘Super Falcons’, built for the purpose of socking it to the American muscle cars that dominated the Australian Touring Car Championship in the late 1960s and 1970s. Lightweight body shell, huge horsepower and a massive spend on its creation and development, this was an epic car. Its day of ultimate glory came when ‘Pete’ was able to top Allan Moffat in one of the best touring car races of all time at Bathurst in 1972.

4. Allan Moffat’s Ford Mo Co Falcon GT-HO Phase III
We’ve grouped these multiple cars under the one title. Sadly it seems the 1971 Bathurst-winning Phase III is long gone (a crash at Adelaide International Raceway the following year accounting for it), though Moffat’s 1973 ATCC-winning Phase III is still around. That was the car stolen on the eve of the Adelaide International Raceway round of the championship, pinched by a joy rider and not returned in time for the race – Moffat borrowed Murray Carter’s car and started from the rear of the grid!

5. Craig Lowndes’ ‘Green Eyed Monster’ 00 Motorsport AU Falcon
The AU Falcon generally is an unloved Falcon, however Lowndes’ version is deeply burnt into the memory bank of Ford fans from the V8 Supercar era. While it didn’t win many races, the fact so many people ask us about it here at V8 Sleuth to this very day just shows you how much of an impression it made on the public. The bloke steering it sure played a part in that too!

If you like the Bathurst-winning Falcons of the 1990s (from 1994 and 1998), save some $$ now in the V8 Sleuth online store here and buy some great posters of these cars to put on your wall!