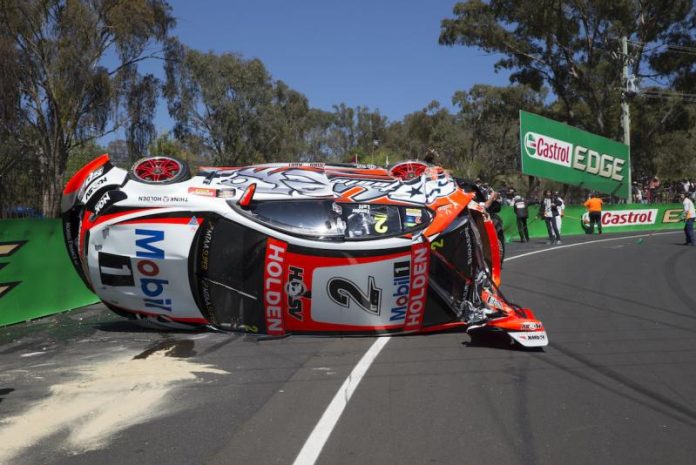 Usually it’s the Gold Coast that makes all V8 teams dive for spare cars. But this time it was Bathurst – so who is in what?

CARNAGE across the race weekend at the Supercheap Auto Bathurst 1000 has left a range of V8 Supercar teams hustling to have spare cars ready for next weekend’s Castrol EDGE Gold Coast 600.

It’s ironic given that normally it’s the Gold Coast and the carnage in its concrete canyon that causes teams to wheel out spare cars for the following round!

Naturally, V8 Sleuth is the best qualified source for this style of story, so there’s the breakdown of who is doing what for the next round of the championship in terms of spare and repaired cars.

* David Reynolds and Dean Canto will take over the FPR spare chassis (FPR 1215) for the Gold Coast – it’s the same car they used to win there last year and has been a spare this year, used by Chaz Mostert at Albert Park and Super Black Racing at Bathurst.
Reynolds crashed his regular chassis in qualifying at Bathurst and, while repaired for the race, needs some further love.

* The Holden Racing Team will move Garth Tander back into the original Car of the Future chassis the team built in 2012 – WR 016.
It was raced in the first half of the 2014 season by Tim Slade before being damaged at Sydney Motorsport Park and since repaired.
Slade’s damaged Supercheap Auto car (which is Tander’s car from earlier this year) will be repaired but was heavily damaged at Mount Panorama.
HRT Managing Director Adrian Burgess tells V8 Sleuth the three-round old Tander/Luff chassis crashed at Bathurst will eventually be repaired to be available for 2015.
The team have another new chassis – WR022 – in build due for November this year.

* Lee Holdsworth’s Erebus Mercedes-Benz E63 AMG went for its second wild ride in as many rounds at Bathurst and won’t be on the Gold Coast.
He will in fact debut a brand new chassis on the Gold Coast – which started life as a Falcon!
The chassis was built as Stone Brothers Racing’s last Falcon in 2012 and given a brief test two years ago before being pulled apart and retained as a spare chassis by Erebus Motorsport.
The Gold Coast will be its actual racing debut.

* Lucas Dumbrell Motorsport will move into another Commodore for the Gold Coast after its regular chassis was damaged in a crash with Tim Blanchard at the helm – a by-product of damage sustained in the crash that sent Holdsworth roiling at Griffins Bend.
The team will utilise the VF Commodore raced last season by Dean Fiore. It has been in storage in Queensland and will be prepared by LDM to return to the track for the GC600.