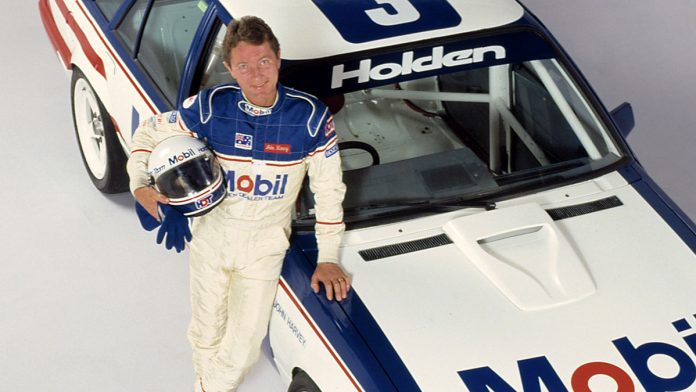 The family of the respected motorsport figure announced the news via social media. He was 82.

He’s being remembered by the industry as a fine contributor to the sport, a talented racer, astute business operator and far more than just Peter Brock’s Holden Dealer Team teammate of the late 1970s and early 1980s.

Harvey went about his business quietly, outside of the hunt for headlines. In a sport dominated by politics and egos, he was proof that nice guys do finish first.

In the 1950s and early 1960s he was renowned as one of Australia’s best speedway racers before switching to road racing, where Bob Jane took him under his wing.

Harvey claimed a slew of success driving for Jane’s team in open-wheel, sports cars, touring car and Sports Sedan racing throughout the late 1960s and 1970s and survived a nasty crash at Bathurst’s 1968 Easter meeting after a suspension failure at Sulman Park in the squad’s Brabham BT23E.

He won the Australian 1.5 Litre Championship in 1966 and finished runner-up in the Gold Star in the same year in doing so before going on to claim back-to-back Australian Sportscar Championships in 1971 and 1972.

“I loved open wheel cars, open cockpit cars – that was my go,” he told the ‘Star Mail’ earlier this year.

“It’s a real race car. It goes around the corners faster than a touring car, brakes harder and compared to an open-wheel F1 car, they were slow racers.

Harvey’s first forays into circuit racing came in touring cars in the mid 1960s at the helm of a Cooper S.

While his touring car career is most closely associated with the Holden Dealer Team, Harvey scored his first Australian Touring Car Championship race win at the Symmons Plains round of the 1976 season, driving a Torana run by local privateers B&D Autos.

Harvey joined the HDT later that same year and became its lead driver for 1977 after Colin Bond’s departure, beginning an association that continued for over a decade.

He was a mainstay of the operation through Firth’s retirement, its years operated by John Sheppard, then under Peter Brock’s stewardship, where Harvey dovetailed racing duties with his key involvement in overseeing HDT’s burgeoning road car operation, HDT Special Vehicles.

While Brock scored plenty of the headlines and victories in the HDT era, Harvey did some winning as well. The duo teamed up only twice – and won on both occasions – with victories in the 1980 and 1981 CRC 300 at Amaroo.

Harvey teamed with Charlie O’Brien to win the Rothmans 500 at Oran Park in 1978, walking back to the pits mid-race for fuel after his Torana A9X had come to a standstill on the track and still fighting back through the pack to win.

In 1983, Harvey won the Bathurst 1000 with Brock and Larry Perkins, the latter pair controversially joining him in the HDT’s #25 entry mid-race after the team’s lead #05 car failed early in the race. They became the first trio to win ‘The Great Race’.

Harvey stayed connected with Holden after its divorce with HDT in early 1987 and achieved some of his biggest successes just as his driving career was winding down.

He and Allan Moffat took a Holden to victory in the inaugural race of the World Touring Car Championship at Monza in 1987, then claimed fourth outright and first in class at the prestigious Spa 24 Hours.

An integral figure in the creation of Holden Special Vehicles and its associated Holden Racing Team motorsport program, Harvey’s contribution to the sport was far and wide reaching.

He made 18 Bathurst 500/1000 starts, beginning in 1965 in a Morris Cooper S with John French. His last start came in 1988 in a Bob Forbes-owned Commodore with Kevin Bartlett.

Harvey also won the first edition of the World Solar Challenge in 1987, piloting the General Motors-developed Sunraycer from Darwin to Adelaide in 5.2 days.

Earlier this year he was awarded the Medal of the Order of Australia (OAM) for his services to motorsport and was inducted into the Australian Motor Sport Hall of Fame in 2018.

John’s son Gavin paid tribute to his father on behalf of the Harvey family via social media this morning.

“Most people will have fond memories of Dad’s amazing racing career and the great memories of him will live on forever,” he wrote.

“To us he was much more, a wonderful husband, father, grandfather and great grandfather, supporting all of us whenever we needed his guidance and love.

“What a life he has lived travelling the world racing with and against the best in the business, always a true gentleman.

“We all know his most proudest achievement was us. We will dearly miss him but we know the time was right.”

V8 Sleuth extends its sympathies to John’s family, friends and fans on the loss of an Australian motorsport legend.