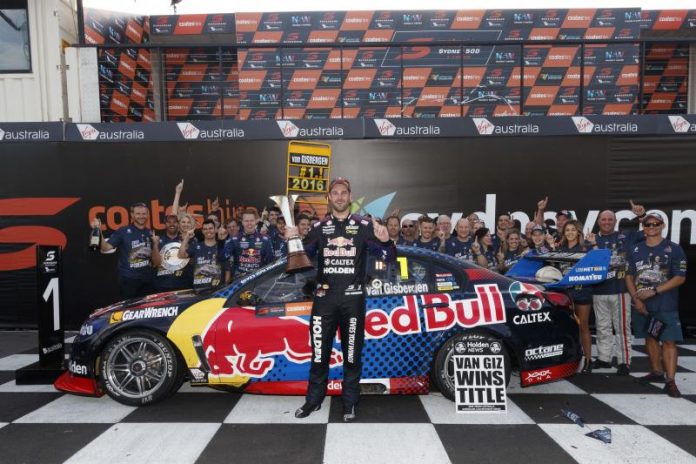 The Kiwi’s #97 Commodore VF will instead move into the Dunlop Series next season following its acquisition by Eggleston Motorsport.

The Melbourne-based Eggleston team has also acquired 888A-040, the car debuted by Jamie Whincup and Paul Dumbrell at the 2015 Sandown 500 that was driven by Whincup through until the end of the Queensland Raceway round this year.

It had remained a spare chassis for the remainder of 2016 though was the car unveiled at Bathurst as a drift-spec Red Bull VF Commodore driven by van Gisbergen in Red Bull videos filmed at Sydney Motorsport Park -it was also driven by Whincup at Bathurst later in the year for filming of a new Virgin Australia safety video.

Eggleston Motorsport will retire two of its Project Blueprint-specification Commodore VE IIs from the Dunlop Series, converting the cars that finished 1-2 at Bathurst in 2010 back to TeamVodafone Bathurst livery as carried by Craig Lowndes/Mark Skaife (#888) and Jamie Whincup/Steve Owen (#1).

Meanwhile it’s going to be a busy summer for the team at Triple Eight Race Engineering in Brisbane as they build three brand new chassis over the off-season for drivers van Gisbergen, Whincup and Craig Lowndes to debut at the 2017 Clipsal 500 in Adelaide.

The chassis Whincup finished the season with is due to become the team’s spare for the beginning of the season given it has also sold the 2015 Bathurst-winning Lowndes/Steve Richards chassis to Queensland’s Scott Taylor.

If you haven’t seen 888A-040 star with Jamie Whincupin the new Virgin Australia safety video, enjoy it here: