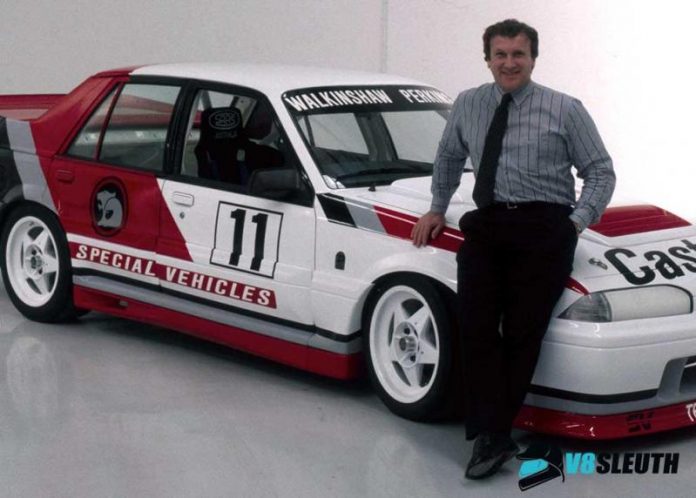 Welcome to the Supercars Hall of Fame our 2018 Inductee, the late, great, Tom Walkinshaw …

FOR a man with involvement in motorsport all over the world, Tom Walkinshaw’s impact on the sport in Australia should sit as one of his greatest accomplishments.

The Scotsman started racing in his homeland in the late 1960s, before really marking his mark as owner/driver of Tom Walkinshaw Racing.

The list of cars, wins and names connected to his time in the sport could run for hours …

Whether it was taking Jaguar to a famous Le Mans 24 Hour win in 1988 or running the Benetton, Ligier or Arrows Formula 1 teams, Walkinshaw had a finger in virtually ever motorsport pie.

But it was here, in Australia, where he built a special connection with Holden, delivering success both on and off the track.

The Holden Racing Team grew into a giant of V8 Supercar racing under his ownership, dominating the category in the late 90s and early 2000s.

Under TWR’s control, HRT won six of the seven V8 championships from 1996 to 2002, and Walkinshaw Racing later provided the hardware for the Toll HSV titles of 2006 and 2007.

Perhaps there’s no better illustration of his legacy than the fact the first HSV-produced car has, and will, forever be referred to as the ‘Walkinshaw’ Commodore, despite that not actually being its official name.

Bathurst was a place where Walkinshaw found plenty of success and his cars excelled.

As a driver he competed in the race three times, his last appearance in 1988 also the final competitive drive of his competition career.

He took the first Group A pole there in 1985 in a howling V12 Jaguar … his two-wheeling through McPhillamy Park is the stuff of racing legends.

John Goss and Armin Hahne gave Walkinshaw’s team victory in the race, an event TWR would again win in 1990 after the formation of the famous Holden Racing Team.

And over time, Tom’s HRT would make the Mountain its own.

Walkinshaw was a powerful personality of motorsport.

He pushed things to the limit on and off the track.

He was hard-nosed, competitive and driven, in racing and in business.

Tom passed away from cancer at the age of just 64 in December 2010.

His contribution to the Australian motorsport and automotive landscape is simply immeasurable and his name lives on in our pit lane as part of the Walkinshaw Andretti United banner.