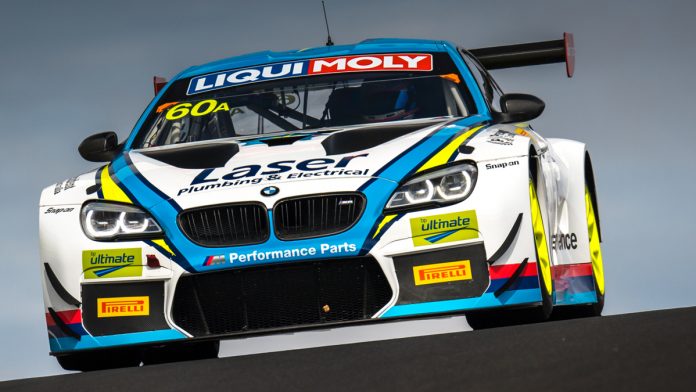 THE BMW M6 GT3 race car utilised by Steve Richards Motorsport for three years in Australian GT competition has been placed on the market.

The V8 turbo-powered racer, that made two starts in the Bathurst 12 Hour in 2017 and 2018, is on the market via Racecarsdirect website for US$180,000 with a huge spares package also available.

The car is included in the new limited-edition collector’s book documenting the history of the Bathurst 12 Hour in the GT era, with a photo of every car from every year’s race included among the full results from each year’s race and chapters by editor Richard Craill documenting each of the 10 races held since 2011.

The 320-page hardcover book can be pre-ordered here now and will be limited, so first in with orders will guarantee a copy of the book.

The BMW M6 – chassis 1508 – was delivered to DG Racing and run by Steve Richards Motorsport in the Australian GT Championship and the Bathurst 12 Hour.

Run with full BMW Motorsport support, the car was driven by Richards, Mark Winterbottom and German factory driver Marco Wittmann in the 2017 race and by Richards, Timo Glock and Philipp Eng in 2018.

Richards also shared it in GT competition with a range of pilots including James Bergmuller, Michael Almond, Ricky Capo and Dylan O’Keeffe.