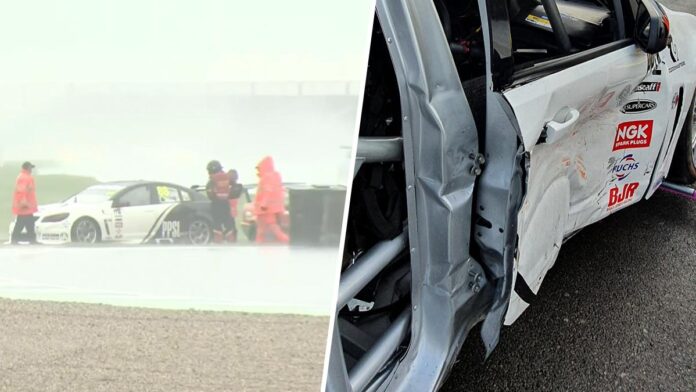 ENGLISH Supercar owner and racer Alex Sidwell had a lucky escape after a nasty crash at Silverstone last weekend aboard his Brad Jones Racing-built Holden.

Sidwell qualified on pole position and won the dry opening race of the combined CMMSC Super Saloons and TinTops race – his first race victory in the car.

However, the heavens opened for the second race and Sidwell was T-boned on the opening lap.

“Alex could barely see out the windows and had decided at the start of the first lap he was going to come in but didn’t get as far as that,” a post on the Holden Racing UK Facebook page explained.

“Alex was in the lead but an out of control car not long into the first lap aquaplaned, came off on to the grass, hitting Alex in the driver’s side at some speed, causing a lot of damage.

“Alex is a bit battered and bruised, thankfully he wasn’t badly hurt. It’s a good job you sit quite far inboard in a VF, plus the side impact protection helps.”

In addition to the panel damage, several bars on the drivers’ side of the roll cage were bent or twisted by the impact.

The team has a stock of spare parts and panels but it doesn’t have a Car of the Future chassis jig, which could mean the chassis will be sent back to Australia for repairs.

The chassis – BJR 001 – was the first to be built completely in-house at BJR and was the team’s first Car of the Future specification Commodore, debuted by Jason Bright in 2013.

It’s best known for winning the inaugural Jason Richards Trophy at Pukekohe in the car’s maiden season, and then suffering a massive accident at the Adelaide 500 the following year.

Initially thought a write-off, the bare chassis was stripped of its components and offered for sale by BJR for just $10,000.

However, it was eventually rebuilt by BJR and returned to action in the Super2 Series, driven by Jack Smith in 2017 and Zane Goddard in ’18.

Sidwell purchased it at the end of that season, driving it at Winton the week after the final round in Newcastle and again in 2019 following a rebuild.

It arrived in the UK in December 2019, but only turned its first laps in its new homeland in April this year.

BJR 001 is among several Supercars in Sidwell’s ‘Holden Racing Team’ fleet in the UK, where it lives alongside Commodores from Tasman, PWR, Walkinshaw and Garry Rogers Motorsport.