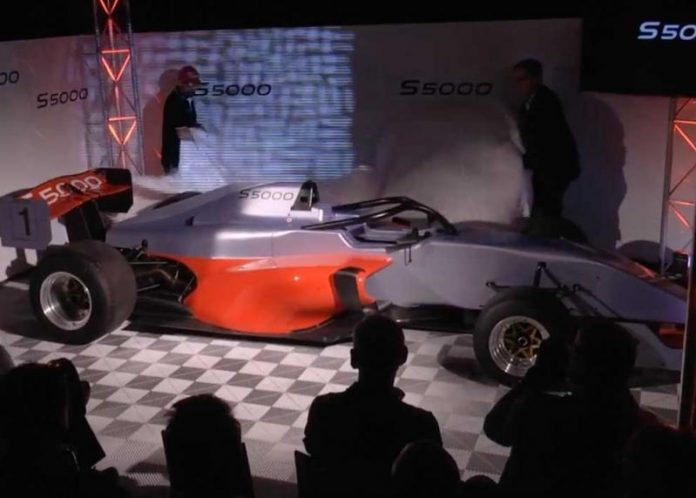 THE long-awaited S5000 series held its official launch today at Sydney Motorsport Park ahead of its debut season in 2019.

After renders were released in July, Australian open-wheel racing legends John Bowe and Warwick Brown pulled the covers off the final version of the V8-powered open wheeler.

“It is a great honour to see the fruition of countless hours of planning and work come together here in Sydney today,” Matt Braid, director of category managers the Australian Racing Group, said.

“This is the motorsport category that is going to shake up the industry. For many years, we’ve been yearning for a local, cost-effective, premier open wheel motorsport category, and we have no doubt that the S5000 package is the car to deliver what is needed.

“They will be fast, loud and entertaining, and since revealing the car three months ago, we anticipate that the best drivers and teams from around Australia and abroad will be part of this history-making category.”

“The revealing of the S5000 is truly a landmark day for Australian motorsport,” Chris Lambden, category manager for S5000 and the proponent of the initial Formula Thunder 5000 proposal, said.

“There is now the certainty that teams and drivers have been looking for to enable them to commit and plan for 2019.

“S5000 is going to offer the ‘big-bang’, serious open wheeler racing that Australia hasn’t seen for decades, and there’s no doubt that the car and competition package will excite people.”

The cars, powered by a sealed 5.0 litre, 560hp V8 Ford Coyote ‘Aluminator’ engine, fitted to a bespoke carbon-fibre monocoque that features the new halo cockpit protection device, are expected to break the outright lap record at almost all of the venues they visit.

Test driver Tim Macrow was on hand to drive the car for its maiden public laps, as were Supercars racers Andre Heimgartner and 2017 Bathurst 1000 winner Luke Youlden.

Aftoer Monday’s launchthe car will head to this weekend’s Coates Hire Newcastle 500 where it will cut demonstration laps across all three days of the event, with Bowe and Greg Murphy sharing driving duties.

After renders were released in August, the final version of the V8-powered open wheeler will make its debut with several drivers, including test driver Tim Macrow, expected to turn laps on Monday, before the car heads to the Coates Hire Newcastle 500 this weekend for its first public demonstration laps.

Series bosses are also expected to reveal more details on plans for the category’s debut in 2019, includingthe inaugural season calendar.

Relive the official launch in the video player below.