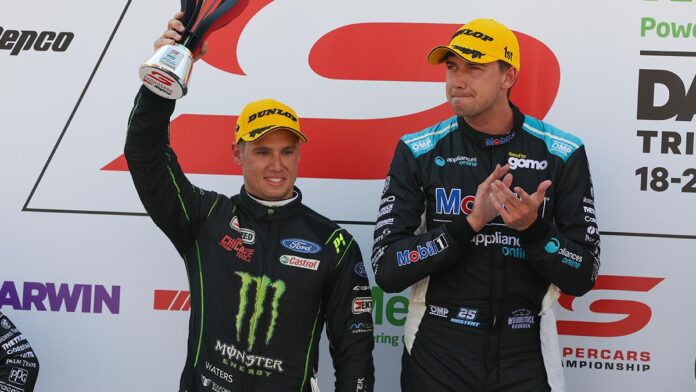 CAM Waters told this week’s episode of the Repco Supercars Weekly podcast that we can expect an announcement on his Supercars future sooner rather than later.

This year marks Waters’ eighth season with Tickford, having joined its Super2 Series squad in 2014 and graduated to the ‘main game’ with them in 2016.

However, Jamie Whincup’s imminent retirement from full-time driving in the Repco Supercars Championship has made for an interesting 2022 silly season.

Listen to the full episode in the player below!

Waters is one of a handful of drivers that have been mooted as a replacement for Whincup should Triple Eight wish to opt for an established star rather than a promising youngster.

“I think that was just Chaz Mostert trying to spark up rumours to take the heat off himself!” Waters joked on Repco Supercars Weekly.

Mostert was another driver outwardly considered to be an option for Triple Eight, but he recently signed a new multi-year deal to stay loyal to Walkinshaw Andretti United.

Waters is nearing the end of his most recent contract with Tickford, announced at the 2019 Bathurst 1000 as a ‘multi-year’ deal – generally this was understood to mean a new two-year contract with options to renew for a further period.

Tickford team principal Tim Edwards recently hosed down suggestions that Waters could depart the team at the end of 2021, citing an automatic renewal clause that had been triggered amid his impressive run to second place in last year’s championship.

Waters has grown into a genuine championship contender with the squad and rose through its ranks to become its lead driver following the departures of Tickford veterans Mark Winterbottom and Mostert in 2019 and 2020 respectively.

“I’ve already made it pretty clear that I’m pretty happy where I am at Tickford,” Waters added.

“I’ve got a really great team around me and we’re going from strength to strength.

“I think you’ll have some news pretty soon of what I’m doing in the next few years… I’ll leave it at that.”