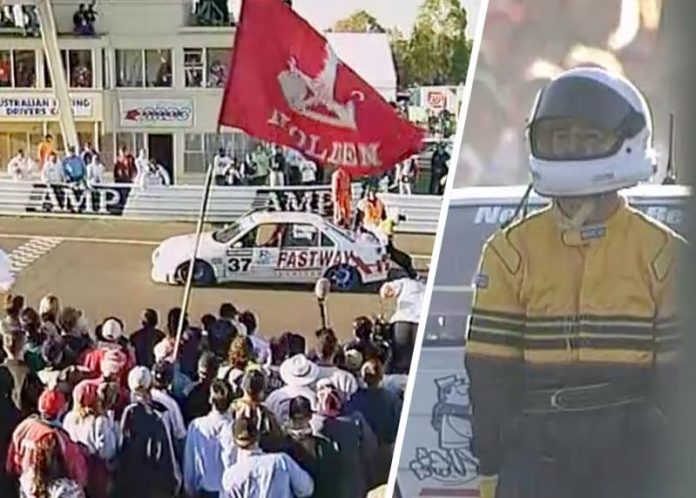 WHEN I left the Supercars pit reporting role at the end of 2017 my family and I made a significant lifestyle change moving to the beautiful Hawkes Bay region on the east coast of New Zealand’s north Island. A few racers call this part of the world home. My old colleague Greg Murphy grew up here.

Facebook clearly knows too much because it suggested I reconnect with a Dwayne Bewley, who I knew 20 years ago when I worked on the broadcast of the 2-litre Australian Super Touring Championship.

He raced as a privateer back then for the Fastway Couriers Peugeot team and also tested a V8 Supercar for Imrie Motor Sport during the formative phase of Team Brock.

Nowadays it’s about the next generation of Bewley racers with his sons competing in karts in recent years. The youngest Tom raced in Australia and in Italy in 2018 in addition to a busy local program.

You’re still surrounded by cars and winning a few trophies I see working at an Audi Dealership in Napier. Tell us more about your role there?
I’ve been here for 10 years now with Euro City. I started off as a sales consultant, then became a sales manager and brand manager for Audi, and now just recently I’ve gone on to be general manager – so now I’m upstairs! We’re in this fabulous new dealership which has just gone over a year old; it’s been exciting and interesting.

How did you stitch the deal together back in the late 90’s to race in the BOC Gases Australian Super Touring Championship?
I went over to Australia in 1997, so a few years ago now! I was racing here in a New Zealand Touring Car, but I didn’t have the budget to complete the championship.

Like every other motorsport enthusiast, I was watching Australian Super Touring on TV here in New Zealand, and there was an article that Tony Newman did. He said he had two cars and he was going to be looking for another driver.

I picked up the phone – I had a contact through Fastway Couriers that got me in there – and I went over there and had a test, and ended up getting the drive.

They were ex-British championship Peugeot 405’s weren’t they?
Yeah, they were. Patrick Watts raced one of the cars originally, and then we went into the 406.

There was also a brief run in a Ford Mondeo as well, wasn’t there?
Yep! We went over to Mallala and we only had the one 406 that Tony was racing. I wasn’t racing at that round, so that might have been in 1998, but I went over there. I forget the driver of Peter Hills’ other Mondeo (ed: Carlos Rolfo), but he had a burst eardrum when he flew in.

People will probably best remember you trying desperately to push the Peugeot over the finish line at the 1997 AMP Bathurst 1000. It didn’t get you classified as a finisher, but it made the front page of the papers! Walk us back to that moment: what happened?
There were 10 laps to go. I was coming down Conrod and all of a sudden all the oil lights and alarms came on. I radioed in and said we’ve got no oil pressure. I think we were in the top 10, one of the top privateers at that stage. Paul Grimm, who was the team manager, said to me to just try and bring it in slowly. I got to The Chase and the engine expired. Big time.

I rolled in just under the bridge where you could see the lap scoring, and I sat there feeling really disappointed. And then I thought, well, let’s let it cool down – the engine might have only just nipped – and try to start it on the last lap and try and drive it across the line.

So I hit the button and there was … nothing. She was dead. Then I gave it a bit of a push to try and get it to roll down pit lane, but I got a bit of a roll on. I thought, hang on … I tried to crash-start it but it didn’t start, so I thought I’d roll down to the last corner and roll across the finish line. I could at least do that for the team, because there was a lot of effort that went into it in the lead-up.

Of course, you don’t realise it, but there’s a bit of an incline to the finish line.

I jumped out and tried to grab the car by the roll cage with the door open; the car started rolling back on me! And then the crowd just went crazy! So I went to the back of the car, and the rest is history, pushing it across the line.

You also raced at Bathurst in a Subaru in 3-hour Showroom Showdown production car race?
Yes, I did, and in another Peugeot with Warren Luff. The Subaru was with Trevor Schumack was my last race at Bathurst. We were doing really well but the engine expired on that one too.

I believe you also had a test in a V8 Supercar at Calder. How did it go, which car and there were some other drivers testing on the day too?
It was with Mike Imrie Motorsport. Peter Brock was starting a team, basically for James. Ryan McLeod was the team manager, he and I go way back. He called me. I’d been in Australia for four and a half years and just come back to New Zealand – straight into my old job with John Deere. The next minute I get the call and have to go back to my boss… ‘Sigh … away you go then!’

There was Steve Owen, there was James … I honestly can’t remember who the drivers were now.

How did you find it after driving a very different racecar in the front wheel drive Super Tourers?
When I hopped into that Supercar – it’s not the generation they are now, the didn’t have sequential gearboxes, and I was coming out of a Super Tourer that had them – and they had a whole lot of power, but it didn’t corner, it didn’t brake … I thought it was like driving a dinosaur.

I did that one test and didn’t really know where all our laptimes were and so on. But I then got a call to go back. I flew back two weeks later to do another test … but it came down to money in the end.

They’re fond memories because I got to meet Peter. I remember hopping in a ute and driving to the other side of the track with him – I think HRT was testing on the day as well.

And there are the next generation of Bewley racers too. Both of your boys have done some racing, but one of your young fellas has been racing in Australia and Italy this last year?
When we came back to New Zealand, I had to get the motorsport thing out of my blood. That was hard. We ended up getting a property and having two lovely young boys. It must have been in their blood too, I suppose.

I didn’t really want to get into motorsport again because I could see the heartache that it can bring, but it can also bring a lot of joy and fun. My oldest boy, he’s not really sporty but he just loves anything with a steering wheel or handlebars and a motor. We got him a kart when he was six years old.

Then Tom, the younger one, he was keen as well, so we both did it. He’s very, very competitive: he loves, eats and breathes karting. He’s third in NZ currently.

We’ve been fortunate enough to win a couple of series including the Goldstar series, which gets you a drive over in Australia, and then we also entered ROK Cup, which he also won to represent New Zealand at the worlds’ in Italy. That was huge, absolutely huge for a 10 year old – and he was competing up against 13 year olds. If he keeps it up and we get there again next year I think we’ll do a bit better, but he did us proud.

Does that mean all the energy goes into this now. Do you still pull on the helmet occasionally and is there a want to build something and race it? If so what category?
The last time I would’ve drove a car was at that V8 Supercars test in 2001. When we first came back to New Zealand I got a kart. I’d never done it before, I did motocross before I got into cars, so I did that for a year and a half, but then we got the property and got busy, and didn’t have the time to do it. Then my boys bought me for my birthday two years ago a drive in a kart on a fun day … I came out bruised and battered! But I would love to get in a car again.

My older boy, he’s 13 now, and he’s been sniffing around … we’re talking about maybe getting and building up a club car. I’d like to jump into that and do some fun events with him.

What’s your proudest moment of your time in Australia?
I’d have to say qualifying for Bathurst in 1997 because we were top privateer. I’ll never forget putting in the time. We had two cars – which you can’t do now – Tony was lead driver for #37 and I was lead driver for #38, and then we swapped over, so we could go out in every session!

I jumped into #37, they threw some new tyres on it, and I remember them saying to go for it. I forget the time now, but it was a reasonable time. I remember coming in and there were a few reporters I’d never seen in the pit before. They said, ‘where’s this kid from?’ I was 22-23 years old at the time … that was my proudest moment.

To check out the Rusty’s Garage podcast library click HERE.