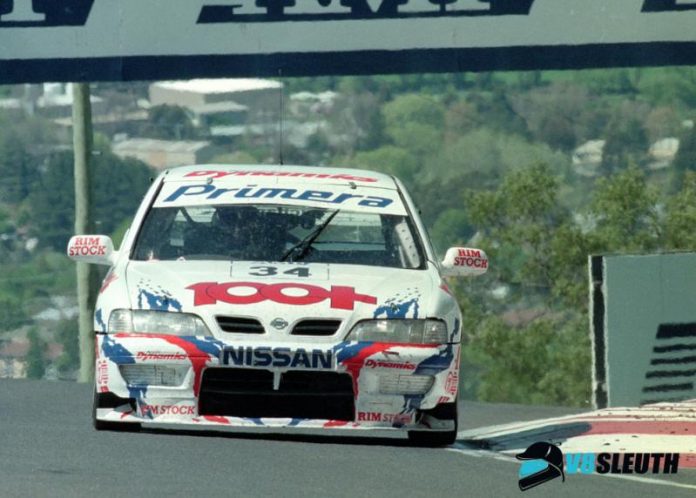 But it could very well be five wins for ‘Richo’ when you consider he came within a ‘bee’s knee’ of winning the 1998 AMP Bathurst 1000 aboard a Nissan Primera Super Tourer with Pom Matt Neal.

The duo finished just 1.9975-seconds behind the Volvo of Steve’s father Jim and Rickard Rydell after an absorbing contest all day long.

As it turned out, Richards Jnr only had to wait another month for his first Bathurst win, teaming with Jason Bright to win the FAI 1000 Classic for Stone Brothers Racing.

But what of the Nissan he used at Bathurst in October ’98?

The good news is that it lives on – in Asia!

Having started its life in Germany in 1998 it became a British Touring Car Championship test car driven by Richards that year during his time as the Nissan team’s official test driver.

The two-litre Primera was stripped and re-built for he and Neal to drive at Bathurst later that season run by Neal’s Team Dynamics crew.

After its Bathurst assault the car returned to England and was repainted red, driven by Neal in the 1999 BTCC.

Famously he won a race outright as an Independent that year aboard this Nissan against the might of the various factory teams, scoring an impressive bonus cheque of 250,000 pounds!

After its BTCC career was finished the car was sold off to collector Brian Chatfield and then on to Rick Michels in New Zealand before being purchased by current owner Robert Paul.

Paul retains the car in Indonesia and has used it in the local Indonesian Supercar Championship, winning the title in 2009, 2010 and 2011 before placing the ex-Richards racer into storage for a few years and then bringing it back out in recent times.

“The car is in race ready state, basically the same condition as when I bought it which is excellent,” Paul told V8 Sleuth.

“The only changes have been the covering up of the sponsor stickers, a couple new gear ratios and dog rings, new front and rear discs, and having IES rebuild the head.

Paul previously raced an ex-Longhurst team BMW M3 in Indonesia but says the Primera is significantly quicker. He sees its BTCC success as its main achievement.

“I think the car is more famous, at least internationally, due to its 1999 Privateers race win,” he says.

“That was the first time a privateer had ever won a race in that super expensive series.

“Most of the original stickers on the body were covered over with temporary colored plastic vinyl sheets. I did this to keep the vintage stickers for possible future historic racing.”

Given the popularity of Super Touring cars with collectors in recent years – particularly New Zealand, where this car spent some of its life and other ex-two-litre race cars have ended up – would Paul part with his Primera?

“I’ve never put the car on the market but I would consider selling it for the right price,” he says.

Time for us to start saving our pennies!

As much as the Super Touring era of racing at Bathurst is overlooked, we’re thrilled to see this interesting car live on and will keep hunting all sorts of race cars in all corners of the world!

We have included some Super Touring car histories in our V8 Sleuth subscription database with more to be added in the future.