Home News WHAT HAPPENED TO THIS CHAMPION CAR? 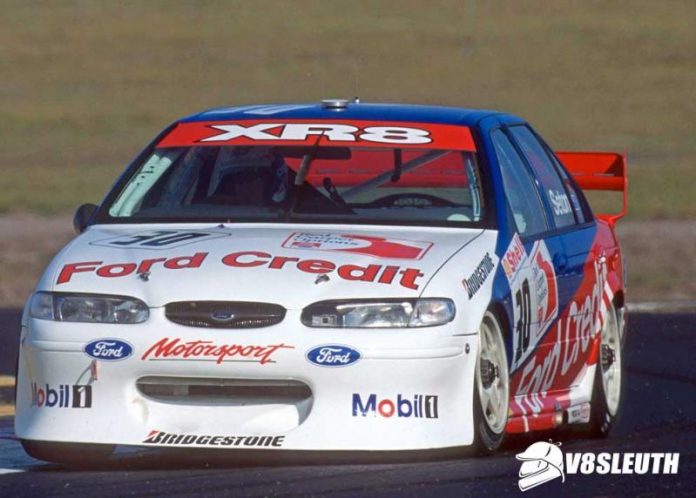 Glenn Seton won the 1997 V8 championship as an owner and a driver. It’s set to be the last time this happens as we profile his winning car …

JUST a week or so ago the 1997 Australian Touring Car Championship-winning Ford Credit Falcon EL of Glenn Seton came straight back to the front of mind when Glenn’s son Aaron stepped behind the wheel of the very same car at the Muscle Car Masters in Sydney.

While the car had dramas on the Saturday and didn’t head back out onto the circuit on the Sunday, it remains a special part of V8 Supercar history given it was the first car to win the championship in the V8 Supercar era.

Next year is 20 years since this great achievement, which no doubt will remain the final time a single car team and an owner/driver will win what is now known as the Virgin Australia Supercars Championship.

It was put on pole position by Seton (you may remember that he was picked up on the in-car camera without having his helmet strap done up!), but failed to figure in the race results.

The car was updated to EL specification for 1997 and used by Seton throughout the championship rounds to clinch his second title.

Seton used the car at Sandown and Bathurst that year as #1 before again running it in the early rounds of the 1998 championship. He debuted a new car at Phillip Island, so this car reverted to becoming the team’s spare.

However, it was wheeled back out for a few rounds at the end of the championship to give new signing Neil Crompton some seat time prior to the endurance events. It ran under the #111 plate.

Seton sold the car to Simon Emerzidis, who debuted it in new red and yellow colours at the Sandown 500 with Garry Willmington co-driving and the duo also competed at Bathurst.

Emerzidis used GSR7 in a handful of events in 1999 before again linking with Willmington for the enduros. The car did not race in 2000 and appeared briefly in the Konica Series in Emerzidis’ hands in 2001, being looked after by John ‘Barrel’ Pachos.

In 2002 it became the ‘Chance of a Lifetime’ Falcon driven by nowadays V8 Utes Champion Grant Johnson in the Konica Series, where the Western Australian finished 10th overall for the season.

The car had its last V8 Supercars hurrah in John Henderson’s hands at the non-championship Konica Series race at Bathurst in 2003 before being sold to current owners Noel and Wendy Willoughby in New South Wales.

“My wife Wendy and I purchased the car in September 2004 in a thousand pieces,” Noel told the V8 Sleuth a few years back.

“Glenn did a favour on his way to Bathurst that year and stopped into a workshop in Western Sydney and took a look at the car to confirm it was indeed the car.

“To his utter surprise it not only turned out to be the correct car, but he was astounded that so much of the original gear was still there including the original correct engine.

“That Glenn was willing to do this and expected and asked for nothing in return speaks volumes of the man’s character, a true gentleman.

“Glenn and I have become very good friends, so much so he often stays with us when in Sydney. Without his help we simply would have found it almost impossible to get this far. He says it’s still his favourite car by a country mile.

“To win the ATCC with a team of only six and a single car entry was, and still is, an amazing achievement.

“We have a gentlemen’s agreement that if we were to ever sell the car, he has first right of refusal to it.”

The car appeared back in its full 1997 warpaint at the 2008 Muscle Car Masters with none other than Seton also getting behind the wheel for a steer, something he would again do on the Gold Coast in 2010 as the car was part of the Pirtek Australian Legends event.

In 2011 fans again got to see the car at the Muscle Car Masters at Eastern Creek but with a special guest steerer: the late Jason Richards, just months before his sad passing.

“I went and saw him on Sunday morning to see if he wanted to have a drive,” says Willoughby of the long-time Holden racer.

“He only got one lap in and it was red flagged. We got him out in the last session and the officials brought the Safety Car in so he got some decent running in.”