Home News WHAT HAPPENED TO THIS LOWNDES WRECK? 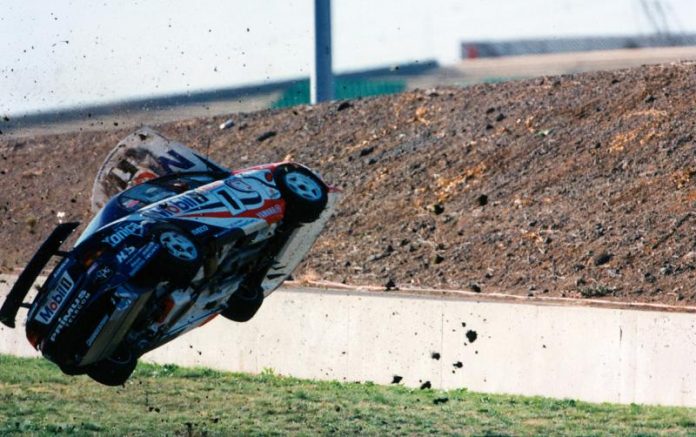 We get piles of email about Craig Lowndes’ 1999 Calder rollover car!

IT’S one of the most famous moments in Supercars racing history and whenever talk moves to ‘biggest crashes’, this one just about takes the cake!

A multi-car accident triggered off the start line at Calder in 1999 saw then-Holden Racing Team ace – and 1998 champion – Craig Lowndes launched into a series of rolls as his VT Commodore went skidding down the circuit on its roof and then commenced a series of ugly tumbles.

‘The Kid’ emerged largely unscathed but his car – which was competing in just its third-ever event – was junked.

The V8 Sleuth team will feature this chassis in a brand new book it’s currently working on for release next year, covering every Commodore to have ever carried the HRT colours.

You can get on the email list to be alerted to when pre-orders go on sale by emailing us via this link here!

It had been debuted at Sandown and also raced at the inaugural Queensland Raceway sprint round, where it had won the inaugural race at the circuit.

In fact, it only competed in a total of seven races over three weekends and never finished outside the top three in its very short life.

Lowndes sat out a round at Symmons Plains after surgery on his knee and returned to eventually claim his third championship, but the car that had saved him from greater injury was a write-off.

Parts and panels salvaged from the car were autographed by Lowndes and auctioned off and the remnants of the chassis were left under a cover and eventually stored at HRT’s chassis engineers, Dencar, in Dandenong, Melbourne.

For some time, HRT had a desire to create a dedicated ride car, which would reduce the workload for the team’s actual racecars.

Towards the end of 2001, two things happened that allowed this to come to fruition.

Dencar needed to clear room in their factory and they wished to scrap the car, and at the same time HRT’s long-time partner Bridgestone lost its contract to provide the control tyre to V8 Supercars to Dunlop.

With an abundance of tyres left over and Bridgestone willing to provide the rubber to HRT’s mooted ride car program, the ex-Lowndes crash car was brought back to life under the direction of Rick Wyatt and turned into a three-seat ride car with a passenger centrally mounted in the back.

Work was completed on the car in 2002 and the car was then dubbed ‘PR2’ (PR standing for Passenger Ride) and pressed into action for the next few years on a range of tracks around the country with hundreds of V8 fanatics going for a hot lap – including our own V8 Sleuth Aaron Noonan!

To keep it distinct from the actual HRT racecars, the PR2 ride car ran on the superseded Bridgestone tyre stock.

It indeed lives on, owned by Mark Skaife since he departed the Walkinshaw/HRT team when he retired from full-time driving at the end fof 2008.

It was given a birthday by Walkinshaw Racing a few years ago and is in tip-top shape and has spent time on display at the Visitor Centre’s History of Motorsport display at the Phillip Island Grand Prix Circuit.

A range of HRT’s top gun drivers have driven it over the year – did you ever go for a ride in the car at a PR2 ride day? We’d love to hear from you!

A full story with further detail will be included in our new book on every HRT Commodore ever constructed – make sure you email us to register your interest to be alerted to when pre-orders open!

The book will be published with a limited print run and will sell out – so don’t miss out!

Here’s a video from YouTube of various lucky passengers going for hot laps in PR2!