Home News WHAT IS IT LIKE TO DRIVE A 1990 HRT COMMODORE? 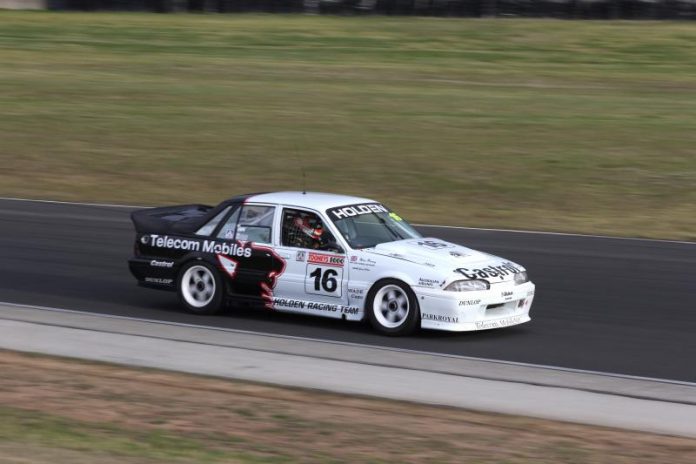 THE new book by V8 Sleuth Aaron Noonan covering the full racing histories of every Holden Racing Team Commodore is eagerly awaited by a range of Holden fans in the Australian motorsport community.

As part of the work on the book (which covers no less than 47 cars to have carried the famous lion and racing helmet logo), we have spoken to a range of people that now own ex-HRT race cars.

One is Victorian Gary Collins, who races the VL Commodore driven by Win Percy in the 1990 Australian Touring Car Championship in Heritage Touring Cars Historic competition.

So, what’s it like to drive a piece of Aussie motorsport history?

“I’ve been driving cars since the early 80s, and in speedway before that. My Group C touring car, the VB/VC I’ve got, you drive that like in drift mode, you drift it between the corners but with this thing you have to keep it straight, there’s no power steering in this one.

“Win Percy and Allan Grice decided to have no power steering to try and cut weight out of it wherever they could. It’s a heavy thing to steer. Do a 20 lapper in it and you’ll know it!

“I don’t know how they steered it back in their hey day with the number of laps they did, (but) at least at Bathurst you get a rest … on a tight twisting track you’re at work on them the whole time.

“I don’t believe in sitting them in museums, I want them out on the track.

“No matter what they’re worth, if you bend them you can fix them. It’s good to see them out there. Same with a lot of Brock cars, they should be out there.

“I drive it fairly hard, I’ve got to keep up with those Sierras. At Bathurst it’s driving at full noise to keep with them. It’s a great feeling; it’s a great buzz. Across the top of the Mountain, it’s a real buzz. I jump out of that and jump into my V8 Supercar and go – oh shit, everything’s changed. Everything’s different!”

Collins’ car – HRT chassis 024 – is just one of 47 HRT race cars covered in detail in the new release book.

Only 1000 copies are being produced so pre-ordering before the delivery in early 2017 is recommended.