Home News WHATEVER HAPPENED TO THE HYBRID BMW? 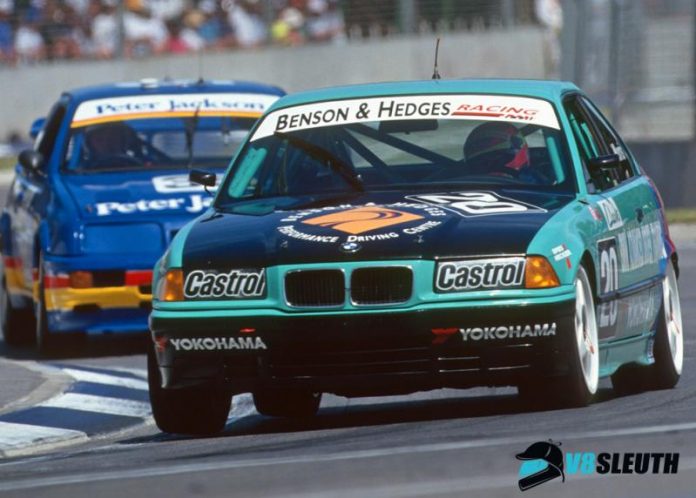 STORY: WILL DALE
IMAGES: AN1 IMAGES

WITH Australia playing host to Formula 1 this weekend, it got us thinking aboutan unusual touring car whose only appearance came at the Australian Grand Prix 27 years ago.

The 1992 event in Adelaidehosted the last hurrah for Group A touring cars, with the turbocharged Ford Sierra RS500s andNissan GT-Rs having their last races under the outgoing rules.

The grid also contained a handful of the new winged, V8-powered Holdens and Fords that would become the focus of touring car racing for 1993 and beyond, with three Commodores and two Falcons in the field.

And then there was the car that didn’t fit in either camp. Paul Morris’ #20 BMW was a mashup of two different cars running two different sets of rules.

The bodyshell was that of an E36 coupe whose colours pointed to its lineage. The car started its life as one of the three Vic Lee Racing BMWs that raced in the 1992 British Touring Car Championship under the burgeoning two-litre Super Touring regulations.

VLR ran three cars for most of that season, including for eventual champion Tim Harvey and touring car veteran Steve Soper, while the chassis that came to Australia had been raced by Ray Bellm until he withdrew from the championship mid-season.

But instead of the car’s usual two-litre engine, into the shell were installed the mechanicals from the 2.5-litre DTM-spec BMW M3 raced by Tony Longhurst and Morris during the 1992 season.

The exercise illustrated the kind of car BMW Australia wanted to race in the new V8 touring car era: a car with the current model shape for marketing reasons, underpinned by the tried and texted power unit and drivetrain used by Longhurst’s team for two seasons.

Morris qualified the bitza in 12th on the grid – behind all three winged Holdens – and raced to eighth in the opening sprint.

He crossed the line 10th in the second, right on the heels of Dick Johnson in his new Falcon but over 20 seconds behind the best of the ’93-spec cars.

It would be the mongrel machine’s last race.

Prior to the Grand Prix, BMW Australia chief Ron Meatchem told Auto Action that the plan to run an M3-powered E36 had been “warmly received” by the CAMS Manufacturers Commission, but the plan was eventually rejected before the end of the year.

Instead, the team soldiered on with a fleet of four E30 M3s – nobbled by parity changes that added weight and limited RPMs – and the E36 shell wasn’t seen again.

So what happened to it?

The VLR sister cars of Harvey and Soper have since been restored and reappeared in historic racing overseas, but the Bellm car has slipped off the radar.

Know anything that could put us on the trail of finding it? Get in touch with us HERE!