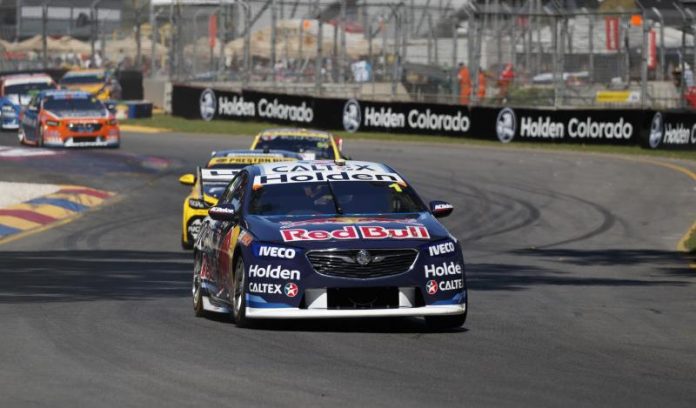 An impressive string of finishes came to an end in Adelaide …

RACE two of the 2018 Virgin Australia Supercars Championship in Adelaide was one to forget for defending champion Jamie Whincup with the factory Holden driver forced out of action after a tough weekend.

Whincup had edged out teammate Shane van Gisbergen off the start line to lead the opening laps of the Sunday leg of the Adelaide 500 before transaxle failure caused the Red Bull Holden Racing Team driver to coast his ZB Commodore into pit lane after only 15 laps of the 78-lap encounter.

The result was the seven-time champion’s first race ‘DNF’ (Did Not Finish) since 2013 and brought to an end an incredible all-time championship record of 136 consecutive race finishes and an even more impressive 26,023 kilometres of on-track running between DNFs!

The last time Whincup failed to finish a championship race was during the first leg of the 2013 Gold Coast 600 and he wasn’t even driving!

Paul Dumbrell, who co-drove with Whincup, was behind the wheel in 2013 when the Red Bull Commodore ground to a halt on lap 21 of the 300-kilometre race following contact with Greg Murphy in the Holden Racing Team Commodore he was sharing with James Courtney.

The 136 race finishing record is a massive 41 finishes ahead of the nearest effort by any other driver – Mark Winterbottom, who finished 95 races straight between 2013 and 2016.

That run of race finishes came to an end with a late-race DNF at Bathurst in ’16 due to brake issues.

Third on the all-time list is Craig Lowndes, who managed to take the chequered flag 81 times in a row between 2012 and 2014.

Whincup’s failure to finish on Sunday also marked his first ever ‘DNF’ at Adelaide since debuting for Garry Rogers Motorsport in 2003, ending an impressive 100 percent finishing record at the parklands circuit.

It could be quite some time before we see his record troubled with the highest active run of finishes currently held by both Garth Tander and Scott Pye, who sit at 25 consecutive finishes since Race 4 at Tasmania last year.

The list of top five most consecutive finishes in ATCC/VASC history is currently as follows: