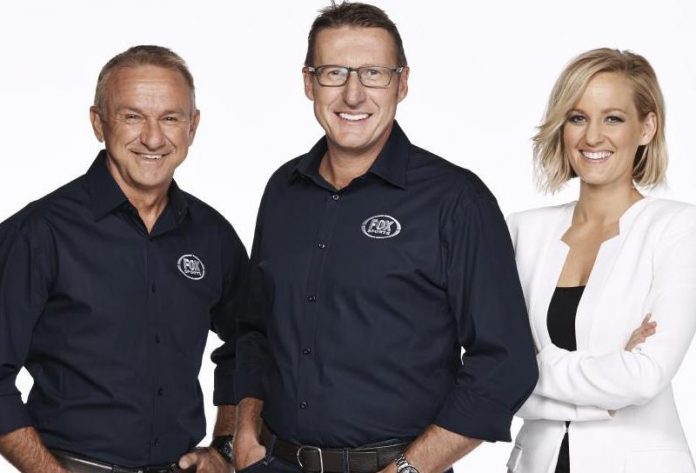 THE television coverage of Supercars racing is one of the topics we get the most amount of email and social media messages relating to here at V8 Sleuth.

So, in order to simplify things and answer a lot of those questions, here’s the snapshot of who is doing what, where and for whom in 2018.

Supercars Media continues to provide the on-air talent line-up covering the practice, qualifying and race sessions this year on both FOX Sports and Channel 10.

Neil Crompton and Mark Skaife will continue to commentate with Greg Murphy and Riana Crehan remaining in the pit lane and joined by Mark Larkham, who replaces Greg Rust.

‘Larko’ moves across from the last three years on Channel 10 having previously patrolled pit lane in the Channel 7 era of broadcasting Supercars racing.

Rust’s role commentating the Dunlop Super2 Series will be taken by regular supports commentator Chad Neylon, who will again work with Matt Naulty, Richard Craill and Cameron van den Dungan in the support category coverage that will air on FOX Sports and selected races of various categries on Channel 10.

Larkham’s place at Channel 10 is taken by V8 Sleuth’s Aaron Noonan, who joins Matt White, Rick Kelly and Kate Peck in their coverage for the six marquee rounds of the championship at Adelaide, Townsville, Sandown, Bathurst, Gold Coast and Newcastle.

Ten will also show the Supercars Championship event at Albert Park as part of its Australian Grand Prix coverage, meaning it will show seven of the 16 championship events with live races with the other nine shown in delayed highlights form.

The network will continue with its RPM program on Sunday afternoons hosted by Matt White.

FOX Sports will continue with Jessica Yates and Russell Ingall joined by Mark Skaife on the host desk of the Supercars round telecasts with the new ‘Supercars Trackside’ show replacing Inside Supercars to feature a mixture of the FOX and Supercars Media on-air talent.

It will air on FOX Sports on the Thursday (Wednesday night for Bathurst) and Sunday evenings at each round of the championship this year.