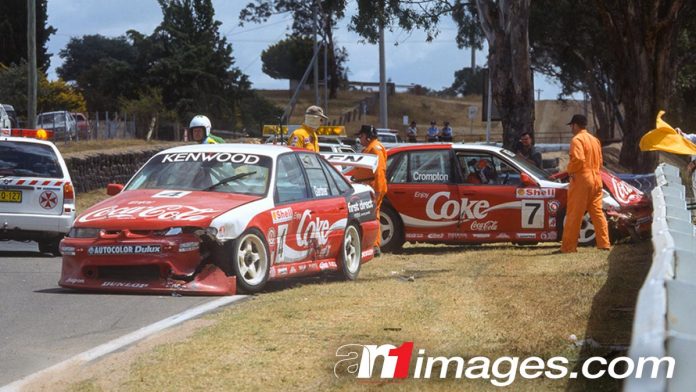 THE 2021 Supercars season opener at Mount Panorama will mark the first single-driver ATCC/Supercars Championship event to be held at Bathurst in 25 years.

Supercars has elected to start its season with the new ‘Mount Panorama 500’ in place of the Bathurst 12 Hour, which was ruled unfeasible amid travel restrictions due to COVID-19.

Although the format hasn’t been announced, it will be a single-driver event, with two 250km races likely.

WHERE ARE THE SUPERCARS RACING IN 2021? Click through for full calendar.

Bathurst has hosted five ATCC ‘sprint rounds’ in its time – the first three in 1966, ’70 and ’72 when the championship ran different regulations to the production car-focused Great Race.

In 1995 and ’96 it was the same cars competing in the sprint round and the traditional 1000 in October, and heading to the Mountain twice in a year divided opinion in the paddock.

While the sprint event only lasted the two years due largely to poor attendance and the high costs of televising races at Bathurst, those rounds provided no shortage of dramatic moments.

Dick Johnson Racing’s John Bowe won both rounds, doing so in 1995 without winning either of the two races, before taking all three under the new format in ’96.

V8 Sleuth looks back at eight key moments – some famous and some forgotten – from the two events, which were the third rounds of the respective seasons.

The 1995 Bathurst sprint event marked the ATCC debut for Mark Larkham and his eponymous team. It proved one to forget and signalled the start of a troubled campaign.

Delays in the completion of Larkham’s radical, in-house built EF Falcon that tried to transfer learnings from the team’s open-wheel experience had ruled him out of the opening two events.

At Bathurst, the Mitre 10 Falcon was plagued by steering and other teething issues, failing to set a representative time in qualifying or be classified in either race result.

While Larkham at least made the grid, Jim Richards was a spectator after a mechanical failure had caused a heavy crash at Griffins Bend in qualifying.

It marked the first time the four-time champion had missed an ATCC race since March 1988, when he was absent from Symmons Plains due to an illness in the family.

The 1995 Bathurst weekend wasn’t all bad for Gibson Motorsport though, as Mark Skaife’s win in Race 2 was his first since returning from the pre-season crash that had ruled him out of Round 1.

In both races at the 1995 sprint round, the field charged off a grid with a vacant front-row as a tribute to the recent passing of both Don Watson and Gregg Hansford.

Transport company owner and privateer touring car campaigner Watson had been killed in practice for the 1994 Bathurst 1000, when his Commodore suffered a brake failure at The Chase.

Hansford, who won The Great Race in 1993 alongside Larry Perkins, had lost his life just a week before the ’95 Bathurst ATCC round while competing in the Super Touring season opener at Phillip Island.

It’s one of the most embarrassing teammate clashes in ATCC history – the Coca-Cola Commodores of Wayne Gardner and Neil Crompton colliding on the run to Turn 1, Race 1 at Bathurst in 1995.

Later ruled a racing incident, the crash was the result of a three-wide squeeze that also involved privateer Phil Ward, who had been in between the two Coke cars as they approached the corner.

The crash, pictured top, took both of Gardner’s cars out of not only the race but the entire meeting, while Ward escaped and ended up with the weekend’s top privateer honours.

The 1995 Bathurst sprint round is best remembered for the agonising seconds in which it appeared Seven’s commentary team had caused Dick Johnson to spin out of the Race 2 lead.

Mike Raymond had crossed to Johnson on RaceCam seconds before the Falcon spun on the high-speed entry to The Chase, which it turned out had actually been the result of a rear wing failure.

While the commenters breathed a sigh of relief when the wing issue became apparent, the failure denied Johnson victory, and his win in the day’s earlier heat proved the last of his long career.

A dog on the circuit

At the Bathurst sprint round in 1996, Dick Johnson had a very different scare in the second of what was now a three-race format.

A stray dog bolted across the track at Skyline just as the leaders were approaching early in Race 2, only narrowly escaping disaster and later triggering a classic one-liner from Johnson.

“I’ve hit mineral [rocks] and vegetable [trees] around here,” he said. “For a moment I thought I was going to complete the set with the animal!”

Glenn Seton also narrowly missed the dog but had an even bigger scare later in the same race when a right-front tyre delaminated approaching Griffins Bend.

Regaining just enough control to avoid hitting the concrete, Seton parked up and explained the incident on RaceCam, just metres from where his Bathurst 1000 charge ended five months earlier.

Seton tells the story of the lucky escape in his new book, Seto: The Official Racing History of Glenn Seton, which is now available through the V8 Sleuth Bookshop.

A 21-year-old Craig Lowndes had enjoyed a dream start to his rookie ATCC season, winning the opening two rounds, but blotted his copybook in spectacular fashion at Bathurst.

He misjudged a passing move on Gardner into Murray’s Corner in Race 2 and collected the Coke Commodore, sending both cars into high-speed spins.

Lowndes admitted fault and was fined $1,000 for his actions, while a furious Gardner declared the young gun must have been “believing his own write-ups” after his winning start to the year.