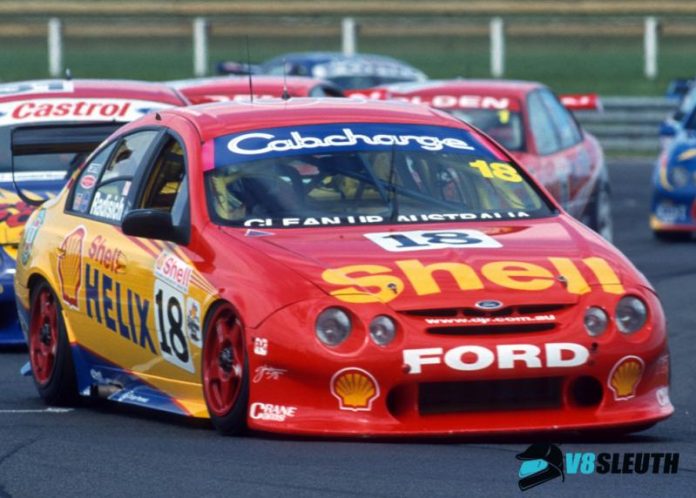 The car’s owner, long-time Porsche Carrera Cup and Australian GT competitor Dean Grant, will drive the 2000-build Falcon in the Father’s Day event that will be held as part of the CAMS Shannons Nationals round.

Grant’s Falcon holds the distinction as being a winner in both the main V8 Supercars Championship and also the development series (now Super2).

ELIGIBLE CARS: What you can run at the Kumho Tyre V8 Sleuth Touring Car Classic

It won the Sandown round of the main championship in 2000 with Paul Radisich driving and finished runner-up in that year’s Bathurst 1000 with Jason Bright (making his first and only start for DJR) co-driving with the Kiwi.

Steven Johnson then drove the car in 2001 to his breakthrough first ‘main game’ round win at the Canberra 400 before it was raced in selected rounds as a third Shell Helix entry in 2002 by Greg Ritter.

Ritter and Alan Jones shared the car in the ’02 endurance races and finished seventhat Bathurst, making this car the last V8 Supercar raced by the 1980 Formula 1 World Champion.

The car – DJR AU11 – then became a winner in the V8 Development Series; scoring round wins in 2004 with Owen Kelly driving to victory for DJR in Adelaide and at Queensland Raceway.

Its last Super2 race came in 2007, making this year’s Classic its first race start in 12 years.

“I’ve had the car for a little while now and this event is the perfect place for it to make a return to racing,” says Grant.

“The DJR cars always have a special connection with the fans given Dick Johnson’s huge following and the Shell AU Falcons are standouts because they ran at the front in that era.

“It’s the era of V8 Supercar that people know and love with the H-pattern gearbox from a time where the cars had road-car origins in terms of their body shells.

“I’m looking forward to getting behind the wheel and giving the fans a chance to see her back in action again.”

Given the era of this car it is eligible to win the Glenn Seton Trophy at the V8 Sleuth Classic for ex-V8 Supercars built and raced between 1992 and 2002.

In addition to a class for Falcon and Commodore V8 Supercars for cars covering 1992 to 2002 there will also be a class for post-Project Blueprint cars (covering 2003 to 2007) up to and including the VZ Commodore and BF Falcon.

More on this car and every other Ford Falcon V8 Supercar built from 1992-2017 can be found in our limited edition collector’s magazine The Falcon Files. Order your copy from the V8 Sleuth Range at Authentic Collectables.