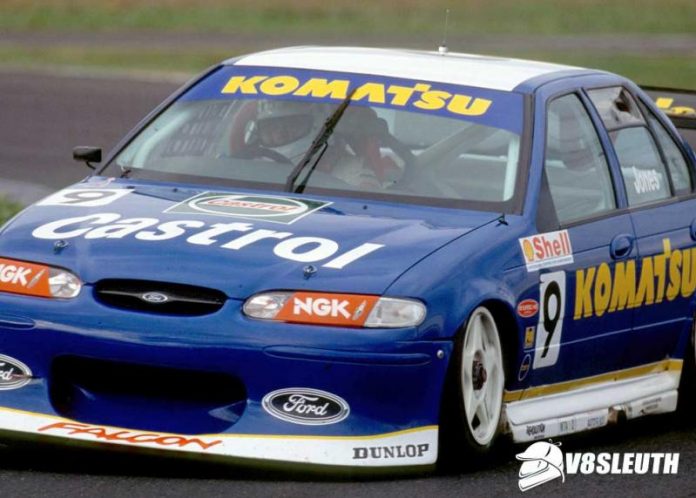 A FORMER Alan Jones Ford is the latest car to join the exhibition at Bathurst’s National Motor Racing Museum.

The Komatsu-sponsored EL Falcon, built and run by Tony Longhurst’s team, was Jones’ car for the 1998 Australian Touring Car Championship, the last where the 1980 Formula 1 World Champion attempted a full season of racing.

The car is currently on loan to the museum from owner Mark Le Vaillant, joining the museum’s extensive collection last month.

After selling out of his existing V8 Supercar operation to the Stone Brothers, Jones rejoined his old BMW teammate Longhurst for the 1998 season aboard a pair of Fords.

Jones debuted his car at the third round of the 1998 season at Lakeside, managing a pair of top 10 finishes among six he scored across the championship with a best result of sixth in the third race at Phillip Island.

He paired with then-newly crowned Australian Formula Ford Champion Adam Macrow for the endurance races, although a broken driveshaft left them stranded on the starting line at Sandown, before Jones was caught up in the multi-car crash at Forrest’s Elbow during the Bathurst 1000.

Bathurst was Jones’ last drive with the team while the Komatsu EL was sold to Alan Heath, passing through several hands before being picked up by Mal Rose for his fleet at the Supercar Experience ride day program.

Le Vaillant purchased the car several years ago and returned it to Jones’ original blue and while Komatsu livery.