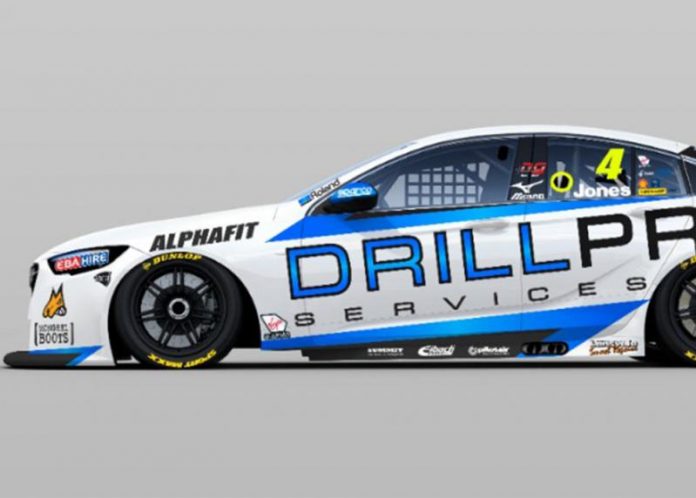 THE Virgin Australia Supercars Championship is set to expand at Hidden Valley this weekend with second generation racer Macauley Jones lining up for his third single-driver start in Supercars competition as a wildcard entry.

The wraps were taken off Jones’ #4 DrillPro ZB Commodore this morning ahead of Brad Jones Racing arriving in the Top End for this weekend’s round in Darwin.

Jones’ addition to the team for the weekend will see BJR running four cars over the course of the event.

The white and blue livery will also be seen on the youngster’s Super2 Commodore in Townsville after making an appearance at the same two events last year.

Jones will be the sole wildcard entry this weekend with Kurt Kostecki confirmed to line-up for a main game start at the Queensland Raceway event next month.

Jones, 23, made two wildcard starts with BJR at Winton and Hidden Valley last year, scoring a best race finish of 20thin the opening race at Winton.

“Most people think since we’ve had a break in the race calendar that we’ve been able to relax a little bit, however there has been plenty going on in the BJR workshop,” says Jones.

“The #4 DrillPro Commodore has been built from the ground up and I’ve had two track days at Winton in the last two weeks.”

Ahead of his first race meeting in the new ZB Commodore (an updated VF Commodore formerly raced by Tim Slade), Jones had the opportunity to sample Slade’s current Freightliner Racing Commodore at Winton to get up to speed with the new aero and tyre package.

“It was my chance to get reacquainted with the Dunlop SuperSoft tyre, spend more time behind the wheel of the new car and for our crew to get some valuable practice in as well,” says Jones.

He will get his first run in the new car when the Virgin Australia Supercars Championship hits the track for opening practice on Friday afternoon ahead of a race on Saturday and another on Sunday.