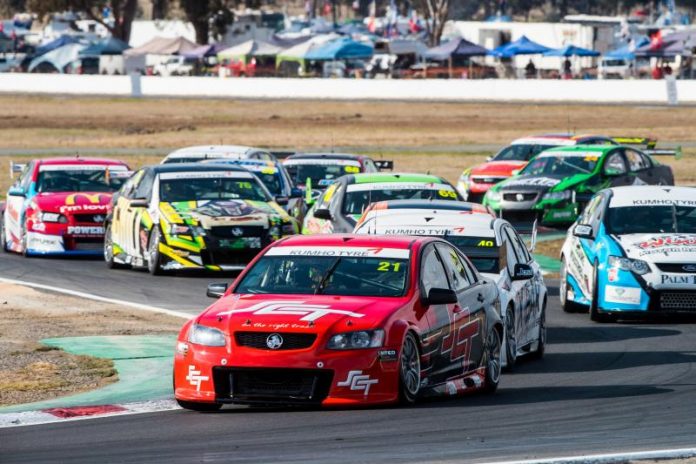 JACK Smith has scored his third straight round win in the Kumho Tyre V8 Touring Car Series, beating home a charging Tyler Everingham to pick up the round win at Winton.

Everingham was one of the stars of the weekend, claiming victory in Race 2 earlier today to take his very first race win in the Kumho Series as Smith struggled for outright pace on slightly older rubber in his Brad Jones Racing Commodore, allowing Everingham to make the pass for the lead and take his first-ever victory in V8 competition.

The 17-year-old said the win gives him lot of confidence heading into the rest of the season.
“It was awesome to get the win and have people with that much experience and to be able to push them and go that little bit harder is great,” he told V8 Sleuth.

“We are going pretty well in the championship and we’ve got some tyres saved for the rest of the year and some great circuits ahead, so I’m really looking forward to it.”

Smith started the weekend from the second row of the grid after a damp qualifying jumbled the order and saw Jordan Boys start from pole for Race 1 on Saturday alongside Western Australian Gary Hills.

The reigning champion Smith managed to pass the front-row sitters by lap three and was never headed, crossing the line ahead of MW Motorsport teammates Zak Best and Everingham to record his third race win of the season.

The final race of the weekend saw Smith make the best of the start and fend off an early challenge for the lead by Boys before his Image Racing FG Falcon suffered engine dramas, forcing him to retire.

Boys’ retirement left Smith to defend the lead from Everingham, who closed to within a second at the chequered flag, though was unable to get by.

Smith’s round win leaves him the first driver to claim three consecutive Kumho Series round victories since Taz Douglas in 2016.

“We came out on top which is always nice, it definitely wasn’t easy though we had Tyler and Jordan pushing us and Tyler was very fast in that race and I was a bit worried for a while when he caught me quite quickly,” Smith told V8 Sleuth post-race.

Everingham and Best completed the podium for the round, while Jim Pollicina claimed victory in the Kumho Cup aboard his ex-Tasman Motorsport VE Commodore.

Andy Cantrell recorded the win in the Heritage class in his ex-Glenn Seton Ford Credit EL Falcon after battling with series returnee Sean Fardell in the ex-Perkins Castrol Commodore VX.

The series resumes in only three weeks’ time at Sydney Motorsport Park for the Muscle Car Masters event on the Queen’s Birthday weekend in June.