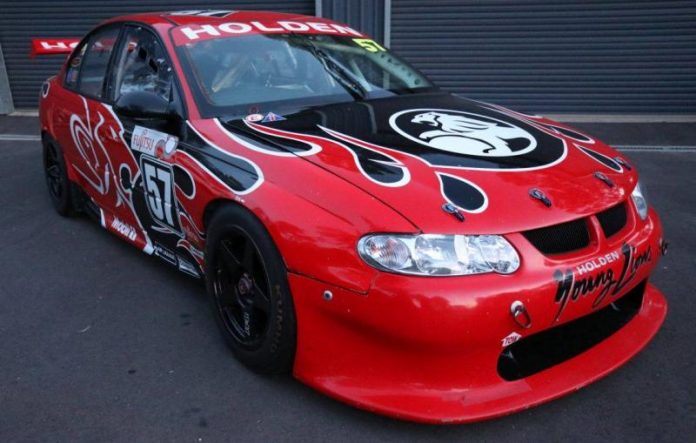 A FORMER Holden V8 Supercar has found a new home on the Central Coast alongside Dick Johnson’s Group A Ford Mustang.

Newcastle-based collector Brad Host recently acquired the ex-John Faulkner Racing Commodore VX from previous owner David Holc after originally having no intention to add another race car to his garage.

“I was speaking with a guy about another car and I was pointed in the direction of this car,” Host told V8 Sleuth.

“While I was travelling around I met with David and he showed me around the car and I could see it was well looked after.

“I’ve always wanted to drive a V8 Supercar and it was too good to pass up, so it was an accidental purchase basically.”

The Novocastrian businessman plans to take the striking Commodore out on track and enjoy his new purchase.

“We want to get it out and learn to drive it and do some proper laps on the track,” said Host.

“I’m more than happy to do runs at Muscle Car Masters and cut some laps in it at certain events because one of the things that’s important to me is not having these cars rotting away in sheds.

“I want to have it out and about and give back to the fans by letting them see it and hear it, and I want to run it at Bathurst sometime down the track too.”

This car is just one of over 1000 Holdens that feature in our Holden at Bathurst – The Cars: 1963-2017 Limited Edition hard cover book available for pre-order here now.

Host’s ex-Young Lions Commodore was originally the first car built in-house by John Faulkner’s team and raced by Faulkner across the 1999, 2000 and 2001 seasons.

Faulkner sold his team at the end of 2002 though kept this car to run in the Konica Series under the Holden Young Lions banner, giving a young Tony D’Alberto his V8 Supercars debut at the Eastern Creek round of the series the following year.

The car continued in the Konica Series in the years that followed and made its last competition start in the series with Bruce Williams at the wheel (the car by then owned by Robert Smith) at Phillip Island in 2006.

It has enjoyed occasional track outings in the years that have followed before being acquired by Host.