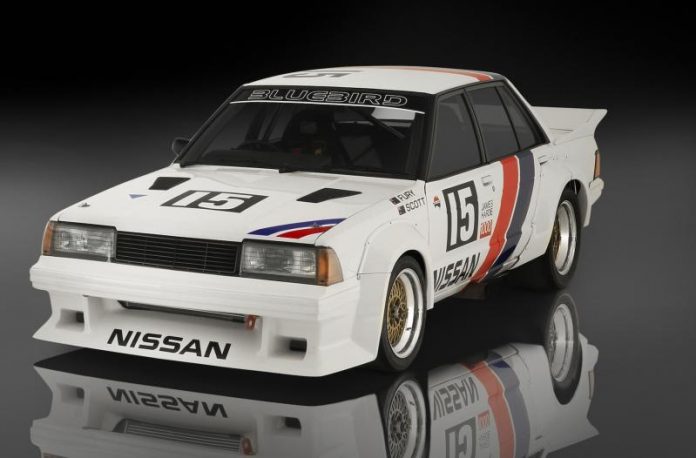 THIS weekend’s final round of the 2014 Heritage Touring Cars Championship at Historic Sandown in Melbourne will be a special one for Nissan fans.

Two of the factory team’s Group C Bluebird Turbos will compete together in the same race for the first time in 30 years!

Brian Henderson’s ex-George Fury Bluebird has been recently restored and the 1984 Bathurst pole-sitting car will have its first race since 1985 with its proud owner behind the wheel.

VIDEO: Here’s George Fury himself behind the wheel recently at Winton.

Henderson will line up alongside fellow regular Bluebird runner Adam Workman and his sister car (driven by Fury at Bathurst in 1981 and 1982) in a strong field of 25 cars.

An added attraction for Nissan aficionados this weekend is the fact that all four surviving Nissan GT-R Group A cars will be present at Sandown.

The 1991 and 1992 Bathurst-winning cars and the 1992 Bathurst third-placed Neil Crompton/Anders Olofsson car will be on display for patrons to enjoy while Terry Lawlor will race his GIO example in the three HTC races across Saturday and Sunday.

Production car and GT regular Tony Alford will add to the Nissan theme and make his first appearance in his recently acquired Nissan Skyline GTS-R Group A car.

He will drive the ex-Sizzler/Alf Grant car that began its life as a factory Nissan Motorsport car and finished third at Bathurst in 1989 in the hands of Jim Richards and Mark Skaife.

The 1985 Bathurst-winning Jaguar XJ-S of Mike Roddy makes it return to Heritage Touring Cars this weekend, while Gary Rowe makes his HTC debut in his recently-purchased Goodrich Mazda RX-7.

HTC competitors will have a 15-minute qualifying session on Saturday followed by a 6-lap race that afternoon.

Two further races on Sunday will compete the HTC racing season with the Victorian Historic Racing Register putting on a 12-lap ‘Grand Finale’ for the last race of the series.