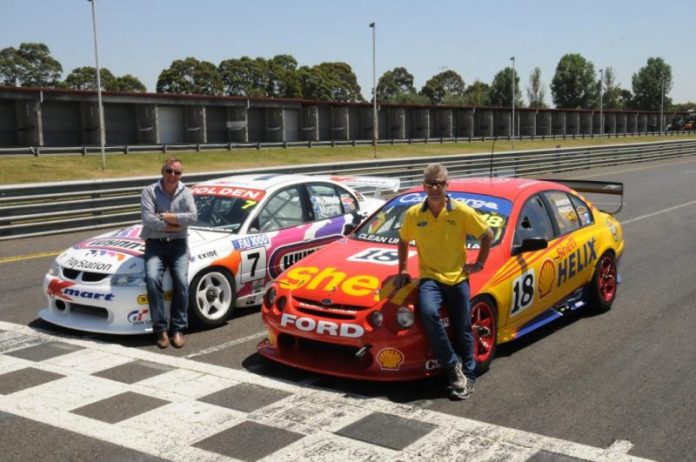 Field of 30 expected for demo event in March

FANS of the early years of what has become V8 Supercars will love what is being planned for the 2014 Phillip Island Classic Festival of Motorsport on March 7-9.

The Australian 5-Litre Touring Car Association will provide a field of 30 ex-V8 Supercars that will grid up for several rolling-start demonstrations at the meeting.

Debuting at Winton and Sandown last year, the Association continues to grow with numerous members joining up in recent months.

Some big name special guest drivers are also due to be announced closer to the event date, according to Australian 5-Litre Touring Car Association founder Troy Kelly.

Kelly was preparing one of the former Peter Jackson Falcons for the 2012 Muscle Car Masters when he realised there were a number of cars from the first decade of V8 Supercar racing currently languishing in garages and sheds with little racing available to them.

“There were probably 200-plus V8 Supercars built for racing in that era, as many of the teams ran three cars, including their own team cars plus another for a privateer,” he says.

“We decided to go with cars from 1993 to 2002, which gives us a good, broad range of cars across an era where there weren’t many key changes to the rules.

“V8 Supercars these days are custom built race cars whereas these were still production based cars. There was a lot of fabricated stuff but they were a lot more basic.”

Former V8 Supercar team owner Mike Imrie raced a series of VT, VS and VX Commodores and in a moment of nostalgia purchased the ex-James Brock Delta Europcar Commodore.

He has since acquired the ex-Gibson Motorsport Wynn’s Commodore VT, which is now liveried as their 1999 Bathurst winner.

He plans to run both cars at the Phillip Island Classic, with the announcement of a ‘name’ second driver imminent.

Trakmaster Off-Road Caravans manufacturer Craig Miles was similarly drawn to this era of V8 Supercars after racing a Group N VH Valiant Charger in Historic racing for some years.

“V8 Supercars was exciting, close racing back then,” he recalled.

“To own and drive one of the top touring cars of little more than a decade ago was an opportunity I didn’t want to miss.”

His ex-Dick Johnson Racing team #18 car was the third of five AU Falcons built by DJR and made its debut in the 2000 Shell Championship Series round at Sandown, winning straight out of the box with Paul Radisich at the wheel.

Radisich partnered Jason Bright in the car in the FAI 1000 at Bathurst, finishing a close second to winners Garth Tander and Jason Bargwanna.

Like Imrie, he is looking forward to the day – they hope soon – when the Australian 5-Litre Touring Cars are accepted by CAMS as an Historic Motorsport category, rather than just a demonstration event.

However he assures those attending this year’s Phillip Island Classic that the 5-Litre Touring Car demos will be far from a ‘parade’.

“Let’s just say we’re planning to put on a good show,” he said.

“No one will be queuing for a hamburger while we’re on!”

The 25th annual Phillip Island Classic from March 6-9 is being staged by the Victorian Historic Racing Register and is again supported by Shannons, CoolDrive, Penrite and Bosch, with new sponsors Zagame and Trico.