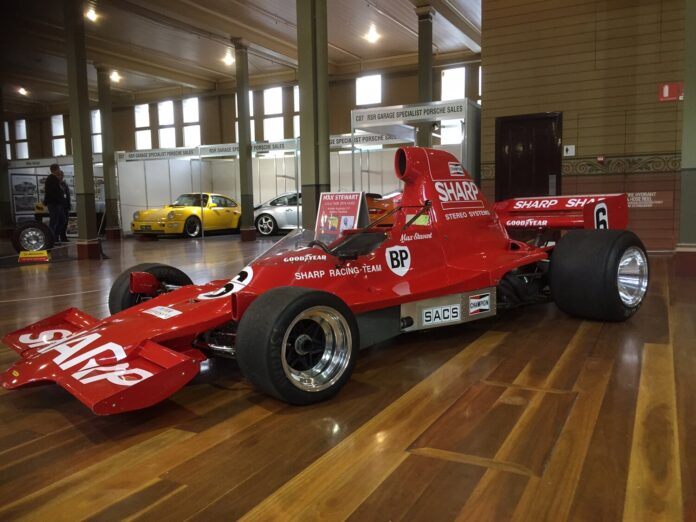 THE 1975 Australian Grand Prix-winning Lola T400 Formula 5000 race car driven to victory by the late Max Stewart has been placed on the market and will undoubtedly attract plenty of attention from savvy Historic race car buyers.

Available for sale now here via Ecurie Bowden, the car (chassis HU-2) was delivered new to Stewart in January 1975 and he drove it to victory in that year’s extremely wet Australian Grand Prix at Surfers Paradise on August 21, 1975.

Stewart overcame the horrible conditions to take victory in the ’75 AGP at Surfers Paradise, leading home John Leffler’s Bowin at an average speed of over 144km/h on a day that resembled a power boat race moreso than a car race!

The atrocious weather and a spin weren’t enough to stop Stewart from taking his second straight AGP win.

Stewart raced the T400 in the 1975 Tasman Series and drove it throughout the New Zealand portion of the series as well as a handful of the rounds that followed in Australia.

He returned to drive it in the Australian Drivers Championship that year and finished third in the Gold Star. He won the opening round – the AGP at Surfers Paradise – and finished second overall in the Oran Park round and third overall at the Calder round (there were two heats at each of those rounds and Stewart won the first of them at Oran Park).

Stewart continued with the car in the 1976 New Zealand and Australian international events at the beginning of that year, however crashed the car during practice at Sandown in February ’76 and spent the rest of that year at the helm of another T400.

The crashed car was repaired, though sadly the two-time AGP winner and two-time Gold Star champion was killed in the other T400 in a practice accident at Calder in March 1977.

The car now for sale was not raced again in the F5000 period (John Walker practiced in it for the Calder event in March ’77, though the car was withdrawn from race day due to Stewart’s accident on the Saturday) and sat in a museum in South Australia before competing in a few Australian Historic F5000 events.

It was then taken overseas and competed in FIA Historic F5000 races, spending time in the United States and then New Zealand before it was purchased by the current owner in mid-2015.

The car has FIA HTP, a CAMS Certificate of Description and its Historic Log Book has just been completed.