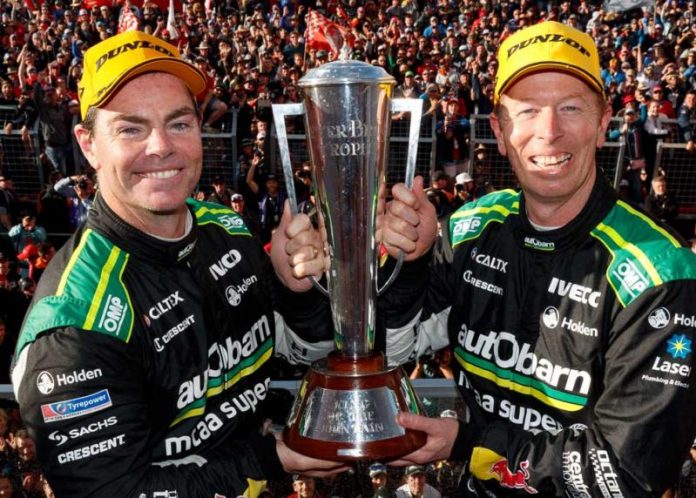 A BAD batch of power steering fluid is believed to be the cause of the persistent power steering problems that almost derailed Craig Lowndes’ bid for victory in the 2018 Supercheap Auto Bathurst 1000.

The #888 Autobarn Holden was plagued by issues with its power steering throughout practice, qualifying and the Top 10 Shootout, Triple Eight Race Engineering only finally confirming the problem had been fixed during Sunday’s pre-race warm up session.

History shows that Lowndes and co-driver Steven Richards went on to a famous victory, the seventh for the popular veteran in his last Bathurst 1000 as a full-time driver.

The team didn’t reveal the ultimate cause of the power steering problems at the time, but the reason is one of many details contained in the upcoming official Supercheap Auto Bathurst 1000 Annual looking back at the 2018 event.

Available to pre-order now here, this 190-page, limited collectors edition publication is officially licensed by Supercars and will cover all the details of the 2018 ‘Great Race’.

Pre-order your copy here now to ensure you receive this piece of Bathurst history.

The V8 Sleuth editorial team has spoken to key figures throughout the paddock in the wake of the race to get the full picture of what went on at Mount Panorama on October 4-7, 2018.

Along with the likely cause of the lost wheel that ended Jamie Whincup and Paul Dumbrell’s bid for victory and the reason for the slow pit stop that cost Shane van Gisbergen and Earl Bamber over a minute, Triple Eight Race Engineering team manager Mark Dutton also revealed what the team traced as the most likely cause of the problems that affected car #888.

“It’s not something that we can say was 100 percent it and nothing else, but the one that is the biggest smoking gun is actually the fluid,” Dutton told V8 Sleuth.

“A process of elimination has basically got us to that point.”

The official 2018 Supercheap Auto Bathurst 1000 Annual will also include car-by-car analysis and driver comment, full statistics and even the return of the V8 Sleuth’s Chassis Inventory documenting the history of every car in the race.

The book – each individually numbered and produced in a limited number – will feature an impressive array of high quality imagery from Australia’s greatest motorsport event from some of the country’s best photographers.

– The road to Bathurst and build up to the race overview.

– Every 2018 Bathurst 1000 car from the race covered, including session information, statistics and fast facts provided by the team at V8 Sleuth.

– All the star drivers from this year’s race.

– Updated Bathurst Record Book featuring statistics and rare images from the history of the Bathurst 500/1000 from the V8 Sleuth photographic archive.

Scheduled to arrive in December in time for Christmas, this publication can’t be missed.

Pre-order your copy here now to ensure you receive your own piece of Australian motorsport history.