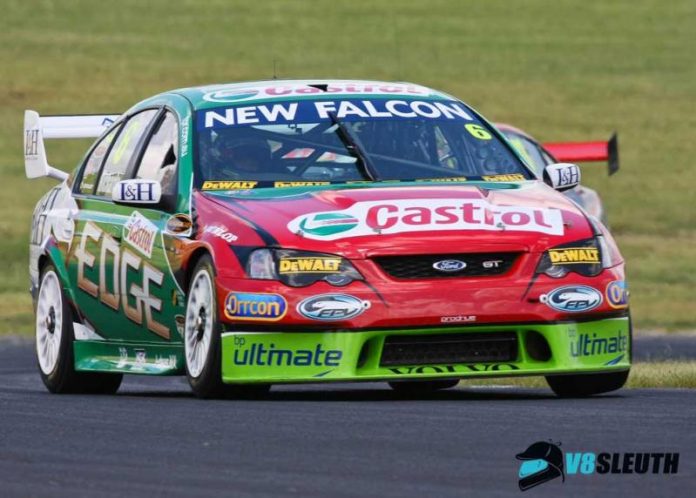 Tickford Racing (the team formerly known as FPR) has recently scrapped the wreck of the Falcon crashed by Steve Richards at Eastern Creek in 2008.

The car – chassis FPR 604 – made its debut with Richards at the wheel in the 2007 Clipsal 500 and took pole position for the Supercheap Auto Bathurst 1000 later that year in the hands of Mark Winterbottom.

It also led that year’s ‘Great Race’ in the hands of he and Richards before it went on a wild airborne ride through the Chase late in the race.

The wreck of the car had been stored by the team since out the back of its Melbourne workshop, mainly due to long-time team manager Chris O’Toole’s superstition of not wanting to get rid of crashed race cars.

But when he broke his leg in a motorbike accident earlier this year and spent time away from the workshop recovering, the team pounced and the ex-Richards chassis was toast!

The car finished third in the 2007 Sandown 500 with Richards and Owen Kelly driving and even survived an accident while being transported to the Bahrain round that November – when it fell off the back of a truck while in transit to the circuit!

Richards ran this chassis at the start of 2008 however it was crashed heavily in round two at Eastern Creek and destroyed.

“We had a loose wheel and I was actually going to come into the pits that lap,” Richards told supercars.com of the accident in a V8 Sleuth-produced Saturday Sleuthing story published in 2015.

“The lower control arm machined the wheel in half, then basically the wheel took the tyre out and the wheel sawed the brake lines off, so it had no brakes at all.

“It was a really sudden stop, I’m pretty sure I was still doing 112 km/h and then zero. There were some tyres there but probably not enough for the speed of the corner.

“They had to use the ‘jaws of life’ to get the engine out! The damage went right back through into the rear parcel shelf. It worked how it should have (to protect the driver) but it broke the engine mounts, smashed the clutch, and broke the gearbox internally. It went all the way back through to the rear axle.”