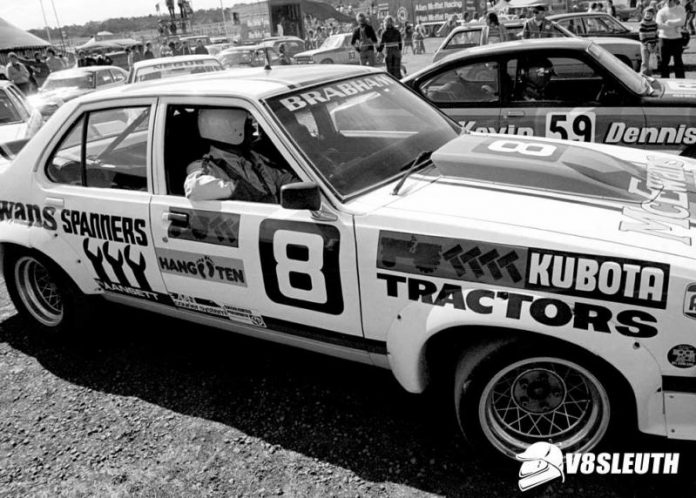 FORTY years ago Jack Brabham made his final appearance in the Bathurst 1000 and now the Torana A9X he drove in the 1978 ‘Great Race’ is going to auction this weekend in Adelaide.

The white four-door muscle car is expected by South Australian auctioneers du Plessis to fetch between $500,000 and $700,000 when it goes under the hammer this Sunday (March 25) in Adelaide.

Brabham raced this car with Aussie international Brian ‘Yogi’ Muir at Bathurst in 1978 and finished sixth – it remained his best finish in the 1000-kilometre classic having had an ill-fated debut in 1976 with Stirling Moss in a Torana and a delayed 18th place finish in 1977 in a Falcon with son Geoff.

The car going to auction – a four-door A9X-optioned Torana – was the great Sir Jack’s last regular competition race car and in fact had its preparation begin with the 1977 endurance races, including Bathurst, in mind.

Former Team Brock mechanic Garnett Bateson put Brabham’s Torana together, a car that featured a steel roll cage, as distinct from the cages in most other Toranas of the time in Group C touring car competition in Australia.

“That took time to sort out and by the time we were under way again GM-H had homologated new bits and pieces such as the four wheel discs and suspension components for the ’77 Bathurst race.

“It was obvious we couldn’t be ready for the shakedown race at Sandown, and if we didn’t run there, I didn’t want to run at Bathurst.”

Brabham indeed was ready for the 1978 season, he and his A9X Torana appearing in a total of nine race meetings that year comprising two rounds of the Australian Touring Car Championship (at Oran Park and Sandown), all five rounds of the endurance-based Australian Championship of Makes plus the stand-alone Rothmans 500 at Oran Park and the Hardie-Ferodo 1000 at Bathurst.

Just three drivers – Jack Brabham, Geoff Brabham and Brian Muir – drove the car during its competition life in 1978 and of them, Geoff didn’t actually get to drive it in a race given it retired before he could step behind the wheel in the ’78 Rothmans 500 at Oran Park.

This car holds a very special place in Australian motorsport history, especially considering the Brabham family lineage with Matthew Brabham – Sir Jack’s grandson and Geoff’s son – to make his Bathurst 1000 debut in 2018 in the same year this car comes up for auction, 40 years after his famous pop made the last of his three starts at the Mountain in Australia’s ‘Great Race’.

The #8 Torana now sits in its 1978 Bathurst livery and spent many years in the hands of the late Ian Kell, who regularly raced it in Historics during the 1990s and early 2000s before it was sold to a private collector after his passing.

The auction will be held this Sunday March 25 at 1pm at 1 London Road, Mile End in Adelaide – the same day as the opening round of the FIA Formula 1 World Championship and Race 6 of the Virgin Australia Supercars Championship at Albert Park.