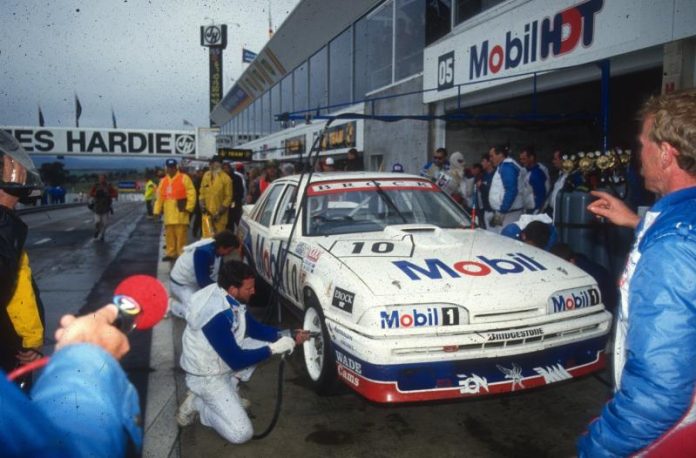 V8 Sleuth takes a look back at the 1987 Bathurst race, the one wherePeter Brock claimed his last Bathurst 1000 crown …

OFall of Peter Brock’s nine legendary wins in the Bathurst 1000, his final victory in the 1987 James Hardie 1000 at Mount Panorama goes down in the history books as fairytale stuff.

It had been a turbulent year for the-then eight time Bathurst champion, perhaps the most controversial in Brock’s great career.

An early season bust-up with General-Motors Holden left their favourite son out in the cold in February and all factory backing was pulled in the wake of Brock’s involvement with the controversial Energy Polarizer and associated dramas.

So Brock pushed on with loyal backer Mobil to mount an assault on the Shell Australian Touring Car Championship. His patience would be tested as one of the older model VK Commodores was smashed to smithereens in testing at Lakeside by Gary Scott.

But slowly Brock found his stride as the season progressed. The debut of the newer VL Commodore and ongoing development of his Bridgestone tyres made him more of a factor by the time the longer endurance races came around. But the lack of backing from Holden was showing through on the score sheet.

Bathurst would see an international invasion in 1987, as the World Touring Car Championship and works teams from Ford and BMW took over the Mountain.

Their presence pushed Brock and his HDT Racing team’s plans into the background. He grabbed David Parsons to share the lead #05 car, while long-time privateer Peter McLeod from Wollongong was given the nod to pilot #10 with reigning Australian Formula Two Champ Jon Crooke.

In reality, times were time for Brock and cash wasn’t plentiful. All of the team’s focus and good parts went into the lead #05 car, while the #10 car was effectively cobbled together to fulfill the commitment of two entries to sponsor Mobil.

The experienced McLeod qualified #10 (the car which Brock had raced at the Spa 24 Hours earlier in the year) 20th on the grid but there were dramas just making it that far. A front steering arm joint fractured in Thursday practice and sent McLeod on a wild ride up the escape road at the top of Mountain Straight.

And the intended race engine was found to have bearing metal in the filter, so the practice engine from #05 – which had done the Oran Park 250 in August and Castrol 500 at Sandown and far from fresh – was put in.

So with a car that wasn’t exactly in tip-top shape, McLeod kicked off the 161-lap enduro and played a conservative and steady race plan. He had worked his way up to fifth after his first pit stop but then found his second stint cut short.

Brock’s #05 car had suffered, ironically, an engine failure and the Mobil HDT boss was ready to jump aboard the second car, as cross-entering rules of the time permitted perfectly legally.

McLeod handed over to Brock, who would then be joined by Parsons for the rest of the race and the combination did their best up against the dominant Texaco Sierras and the best of the locals – the Fred Gibson-run Nissan Skyline squad.

A huge rain storm threw the race into chaos and being in the pits was the undoing of the Nissan challenge. Both cars were in the pits, with the lane exit closed under the pace car rules, allowing Brock to make his stop and get out before the dreaded gate was placed in their way.

It left Brock to fling the #10 Commodore around the Mountain for the rest of the day in third spot, every slip and slide pure magic as his car control consistently dragged the car back onto the drying line.

A chunking right rear tyre forced a quick late pit stop and a bold change to slick tyres, but Brock peddled to the line and finished in third place, three laps down on the winning Steve Soper/Pierre Dieudonne Texaco Ford Sierra RS500.

Storms over the legality of the 1-2 finishing Fords had been brewing all weekend and the rumblings turned out exactly has had been suspected – both cars were excluded from the race for illegal raised wheel arches.

And thus, against all the odds, Peter Brock won his ninth – and ultimately final – Bathurst crown.

The 1987 Bathurst race will feature in the next episode of Shannons Legends of Motorsport on 7mate on Saturday October 18 – check your local guides for viewing times in your area.