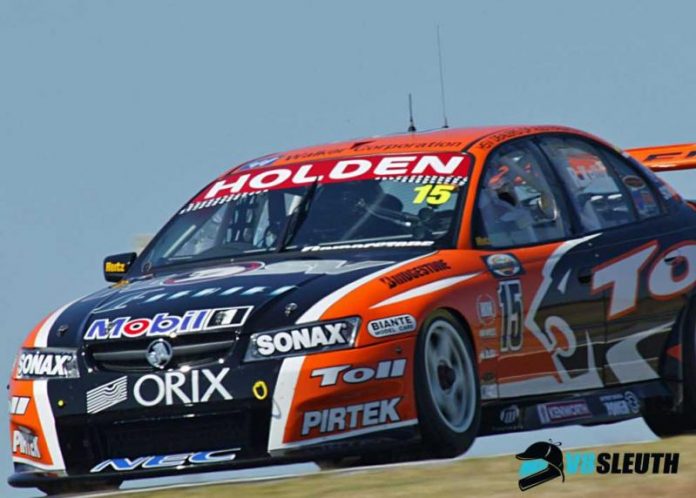 EVEN a decade on there is still plenty of ill-feeling amid Craig Lowndes, Triple Eight and Ford followers of how the 2006 V8 Supercars Championship Series was decided in the last round at Phillip Island.

History shows some light contact from title rival Rick Kelly sent Lowndes into the back of Rick’s brother Todd early in the deciding race and eventually the stranded Betta Ford was ploughed into by Will Davison, causing enough damage to end Lowndes’ title bid and help Kelly to win the title once he’d taken a drive through penalty for his involvement in the accident.

Now Kelly’s #15 Toll HSV Dealer Team Commodore chassis 052 – which also finished runner-up in the 2006 Sandown 500 and Bathurst 1000 driven by the Kelly brothers – is on the market.

Click here for the V8 Sleuth Classifieds advertisement for this chassis.

The car no doubt featured in one of the most controversial championship deciders ever seen in Supercars racing but it actually holds a very special place in the history books of our sport.

It is the only car to win the V8 Supercars Championship (Rick Kelly, 2006), Dunlop Series (then known as Fujitsu Series in 2007 with Tony D’Alberto) and Kumho Series (2014 with Justin Ruggier) in its timeline.

Owned by Eggleston Motorsport since late 2013, the three-time championship-winning VZ Commodore is being returned to its original Toll HSV Dealer Team panels as carried at Phillip Island 2006 (bar the bonnet, the originalremained with Walkinshaw Racing!).

It won last time out too with Jack Perkins clean-sweeping the opening round of the 2015 Kumho Series at Sandown aboard this chassis.

The 2006 V8 championship-winning Commodore will come complete, fitted with an engine it used during Kelly’s championship season. It also comes with a gearbox used in that season with matching numbers. Ironically gearbox number is ’15’ too, which matches the car’s racing number!

This car is also a rarity, one of only two cars in the pre-VE era at HRT/TWRA/Walkinshaw to be built new for the sister Kmart/Toll team rather than originally being constructed for the Holden Racing Team’s use and then passed on to the other side of the Melbourne business parkwhere the teams were based.

Check out the infamous clash from Phillip Island 2006 right here …