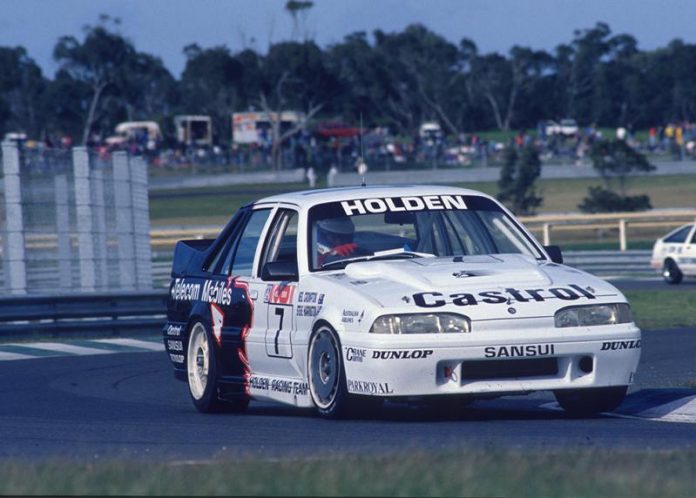 THIS edition of ENZED Classic Cars features a Holden with a long history that initially got off to a slow start – in fact it took more than two years after it was built to make its racing debut proper!

The 1989 Holden Racing Team #7 Commodore driven by Win Percy and Neil Crompton in that year’s Tooheys 1000 at Bathurst races on today in Historic competition and forms a special place in the history of the HRT.

Join the ENZED Motorsport Club here to go into the draw to win an adrenalin-charged day at Queensland’s Norwell Motorplex.

The car’s history dates back to the beginning of 1987, one of two Commodores produced by Tom Walkinshaw Racing in England.

It tested at Monza in Italy ahead of the opening round of that year’s World Touring Car Championship though, for various reasons, didn’t take part in the race or in any of the subsequent WTCC rounds.

This particular car was sent, along with a sister car, to Australia at the start of 1989 for a planned two-car Holden SV Racing Team assault on the Australian Touring Car Championship with Percy and Crompton signed as pilots.

Both drivers conducted early season testing at Adelaide International Raceway and Calder, however the factory Holdens failed to appear at any of the Australian Touring Car Championship rounds as the turbo Ford Sierras and Nissan Skylines blitzed any privateer brave enough to turn up in a V8 Commodore.

However, Holden was back on the grid for the endurance season and this particular Commodore was called up for the Sandown 500 with Larry Perkins contracted to prepare and run the Holden SV Racing Team (rebranded as the ‘Holden Racing Team’) at Sandown, Bathurst and Adelaide.

In September 1989, well over two years after it had first hit a race track, the Commodore finally made its racing debut in the 500-kilometre endurance race at Sandown with Crompton and former Roadways driver Steve Harrington as pilots of the #7 Holden.

This also marked the very first time the Holden Racing Team banner had appeared in an Australian touring car race.

The pair ended the pre-Bathurst enduro sixth and headed to Mount Panorama with Percy moved into sharing the car with Crompton.

HRT’s Commodores were no match for the Sierras and Skyline GTS-Rs throughout the weekend and crossed the line seventh, three laps down on the winning Sierra of Dick Johnson and John Bowe.

This Commodore’s Australian racing life was over as quick as it had begun and following The Great Race the car was sent to Indonesia for Tommy Suharto, the youngest son of the then-president, to race in local competition.

It returned to Australia in 1990 and continued to make the annual trek to Mount Panorama in the hands of privateer drivers and teams. John Lusty ran the Commodore in The Great Race in ’90 before Queenslander Warren Jonsson ran it from 1991 to 1993.

Sydney privateer Mike Conway then bought it for parts for an ex-Peter Brock Mobil VP Commodore he and fellow privateer Bob Jones were piecing together before the Commodore found its current owner, Norm Mogg, who purchased it in the mid-1990s and has raced it ever since in Group A and C touring cars.

He has had the car restored to its 1989 Percy/Crompton HRT Bathurst livery and recently claimed victory in the Heritage Touring Cars races as part of the Muscle Car Masters event at Sydney Motorsport Park.

Given the history of the Holden Racing Team this car is one that will remain a classic for many years to come.

Read all of the other stories in the ENZED Classic Cars series here on the V8 Sleuth website.