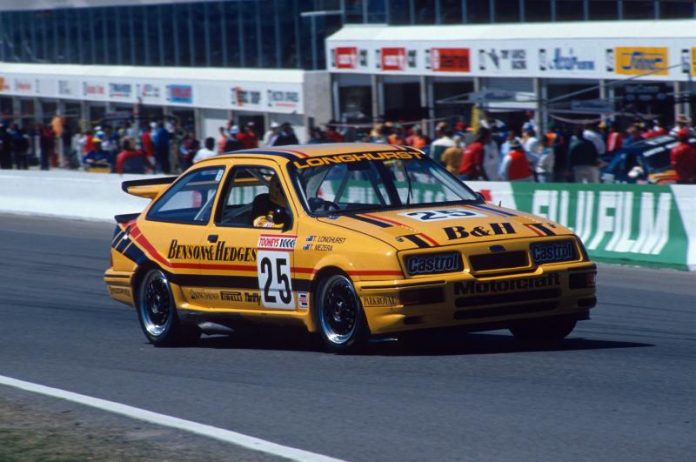 THIS edition of ENZED Classic Car takes us back 30 years to 1988 with a car that will always be remembered for winning Bathurst and sits on display at the National Motor Racing Museum at Mount Panorama – the #25 B & H Ford Sierra RS500 of Tony Longhurst and Tomas Mezera.

The car made history in ’88 becoming the first turbo-charged car to win The Great Race, giving both Longhurst and Mezera their first Bathurst victories.

Prior to its defining Bathurst moment, this car first appeared as the #3 Freeport Motorsport Sierra at the beginning of 1988 after the team was formed out of the remnants of Frank Gardner’s JPS BMW team.

A Rouse kit car had been purchased via Australian importer Don Smith at the end of November 1987 and the ex-JPS mechanics built the car in the team’s temporary Sydney base.

The right-hand-drive car made its debut with Longhurst behind the wheel at the opening round of the Australian Touring Car Championship at Calder Park and finished second to Dick Johnson’s Shell Sierra.

A fourth place at Symmons Plains was followed by disastrous ATCC campaign with engine issues at Winton and Adelaide, axle problems at Wanneroo, a broken gear linkage at Amaroo and a diff problem at Sandown.

The only highlight of the season came at the team’s home track at Lakeside where Longhurst claimed victory, albeit after first-across-the-line Johnson was pinged one minute for jumping the start.

Following the ATCC this car then became the Benson & Hedges Racing Sierra for the endurance races and saw Tomas Mezera drafted in as co-driver.

The pair’s partnership got off to a poor start at the Sandown 500 with the car breaking a universal joint off the start line before recovering to finish sixth.

Longhurst and Mezera turned up to Bathurst in the shadows of their rivals after a difficult season and a Bathurst result looked unlikely from the outside.

The pair showed tremendous pace early on, though throttle problems struck the car after 30 laps costing the team a lap in the process – however such was the attrition, nearly all the leading challengers couldn’t keep up and fell by the wayside, leaving Mezera to cruise the car to the line a lap clear of the second-placed #18 Shell Sierra.

Soon after the ’88 season the car was sold to Sydney privateer Ken Mathews, who engaged Colin Bond’s services to run it for him for 1989 in a part-time race program that saw the car wear Caltex colours.

The car ran at Oran Park’s final ATCC round and finished 15th along with outings in the AMSCAR Series at Amaroo before he shared the car with Bond and Garry Rogers at Sandown – where engine problems forced them to retire.

Mathews was paired with Rogers for Bathurst, though engine dramas struck again ending their race early.

The car made its last competitive start at the inaugural Eastern Creek 500 in 1990 with Mathews teaming up with his son John – though the pair failed to finish the 125-lap journey.

Following its racing retirement, the car was purchased by its original backers W.D & H. O. Wills and donated to the National Motor Racing Museum in 1994, where it still resides today for fans to enjoy.

Read all of our previous ENZED Classic Cars stories here on the V8 Sleuth website.