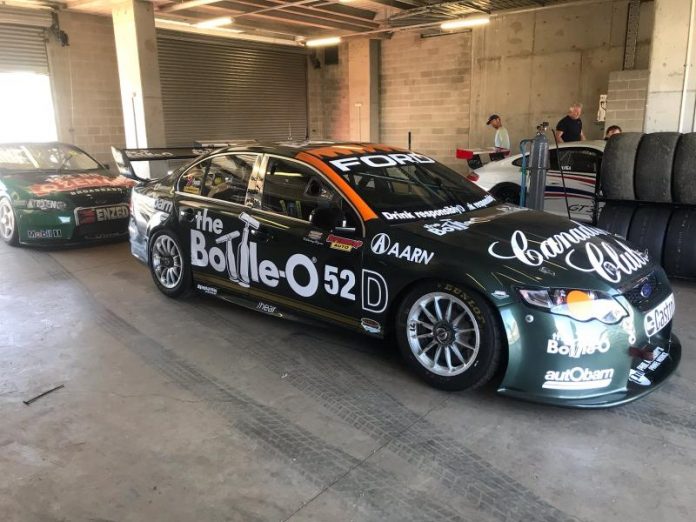 A RANGE of former Supercars that tackled Mount Panorama in their former racing lives have returned this week to compete in the Challenge Bathurst event.

The Supersprint portion of the event is being held today (Thursday November 28) and tomorrow with a two-day regularity event to follow on Saturday and Sunday (November 30-December 1).

The event, run by former Bathurst 12 Hour and 6 Hour owner Yeehah Events headed by James O’Brien, has attracted a booming entry list with more than 400 competitors to tackle the Mountain and the clock.

The event is an exclusive opportunity to drive your own street or track racing car on the famous circuit with a maximum of 160 driving minutes on the circuit in eight 20-minute sessions.

And here at V8 Sleuth it’s a few ex-V8 Supercars that have caught our attention!

The 2012 Supercheap Auto Bathurst 1000 runner-up Bottle-O Falcon FG is back at the Mountain in the hands of Damien Grima and it’s been returned to the unique retro 1967 Gibson/Firth Falcon XR GT livery it carried seven years ago at Bathurst in the hands of David Reynolds and Dean Canto.

Grima’s father Charlie is also having a run around the Mountain in an ex-Brad Jones Racing Ozemail Falcon BA, above, the same car having been raced in the 2003 and 2004 Bathurst 1000 races by Andrew Jones and John Cleland.

While it raced in period in the famous white and green Ozemail livery, former owner John Vergotis restored it to the green and black colours that were normally carried by John Bowe and that has been retained by the Grimas.

By the way, these Fords – and all others that competed in the Bathurst endurance race from 1963 to 2018 – are all included in our ‘Ford at Bathurst’ limited edition, 360-page book that you can order here with a special 10% off discount code!

There’s a photo of every single Ford to compete in ‘The Great Race’ in the book plus many of the cars that didn’t line up on the grid on race day that took part in practice, qualifying etc!

Also at the Mountain for Challenge Bathurst is another car that took part in the 2012 Supercheap Auto Bathurst 1000 in Joseph Hancock’s ex-Holden Racing Team Commodore VE II, above.

Driven to fourth place by James Courtney and Cameron McConville in the 2012 Great Race after a delaminating tyre slowed Courtney’s late race charge, the car is fettled by Melbourne Performance Centre and is the last ‘Project Blueprint’ era V8 Supercar built by Walkinshaw Racing.

Another ex-V8 Supercar competing in the event is the ex-Tasman Motorsport Commodore VZ of Marty Miller – the car is the same chassis that took second place in the 2005 Bathurst 1000 in the hands of Jason Richards and Jamie Whincup in Dodo colours.