Home News HAS THE ONLY BROCK RACING FALCON EMERGED? 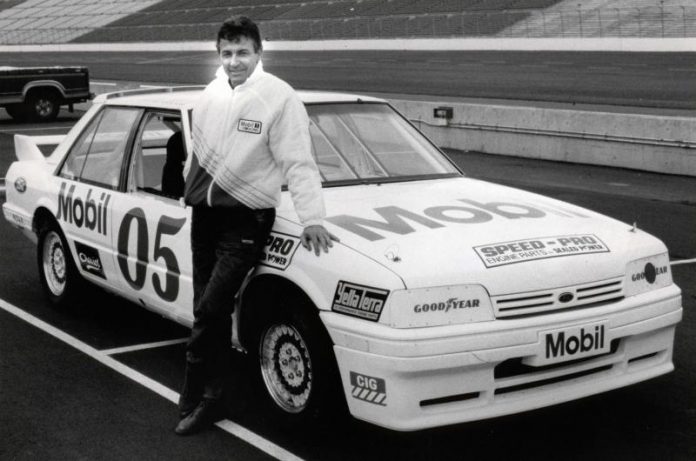 Holden hero’s Ford AUSCAR might just have popped up …

THERE’S only one Ford Falcon racecar in history to bare the famous name ‘Peter Brock’.

An aged XF Falcon AUSCAR has surfaced in an online auction in Victoria this week and has been a hot topic of conversation amongst AUSCAR and Brock enthusiasts alike about whether it’s the very same ‘missing’ Brock Ford.

The details surrounding the sale of the car refer to its history as being built by John Sheppard and driven by a range of pilots during its career including Brock, John Bowe and Kim Jane.

The auction refers to it being build #A 523, however without seeing any log books or any records from Calder Park Thunderdome history (if they even exist is another question!), we can’t validate things one-way or the other.

The talk around the V8 Sleuth water cooler this week led to the question – just how did nine-time Holden Bathurst hero Brock end up in an XF Falcon on a banked super speedway in August 1988?

AUSCAR was the brainchild of Thunderdome creator and promoter Bob Jane, who built his venue at Keilor just outside Melbourne in the late 1980s with the vision of bringing hugely popular American NASCAR stock car racing to Australia.

Developed as the localised stock-car category, AUSCAR featured stripped out V8 Falcons and Commodores, racing in support of NASCAR. Truth be told, Aussie fans better identified with the local machinery.

After his very public divorce from long-time backer Holden in 1987, Brock raced all manner of cars including BMWs, Ford Sierras, a Ford Thunderbird stock car, Peugeots and even Volvos. Ultimately he returned to the Holden fold first in 1991 with his Mobil VN Group A Commodore, before later again enjoying full Holden factory support with the Holden Racing Team in 1994.

But in 1988 Brock was free to drive whatever he liked. He and Jim Richards were teamed up in Mobil BMWs in touring car racing but also found themselves squaring off in AUSCAR.

Brock’s former HDT Team Manager John Sheppard had a spare Falcon recently vacated by John Bowe. With backing from Mobil ‘PB’ qualified the Ford third on the grid behind Richards and Mike Oliver.

It was a public relations dream come true for Jane and the Thunderdome. Australia’s most popular race driver debuting in AUSCAR, and a Ford AUSCAR at that!

History recorded that Brock’s Falcon was far from purely a PR exercise when at half race distance it moved into the lead of the Goodyear AUSCAR 200. Ultimately a split radiator forced him to retire after water sprayed onto the rear wheels causing a wild spin.

While Brock never raced the Falcon AUSCAR again, it remains a unique page in the story of Australia’s most popular race driver.

If you’re interested in further details on the car, click here to see what the latest bid is.