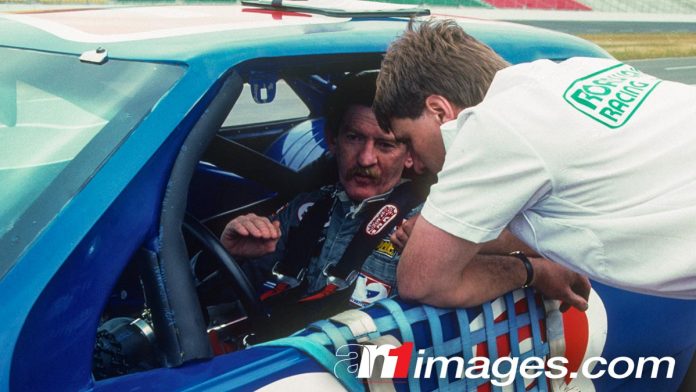 But as the two-time Bathurst winner explains in the latest V8 Sleuth Podcast powered by Timken, an unusual testing crash prevented a third start – and ended his American NASCAR career.

Grice became the first Aussie to compete in the flagship NASCAR race in 1987, surprising many by qualifying his Foster’s-backed Oldsmobile in the field.

While the race, and a return effort in 1989, failed to produce a major result, the Australian entry gained plenty of attention.

For 1991 Grice had a surprise call-up from American outfit RahMoc Engineering, which had consulted on the Aussie’s earlier forays.

Grice was testing the Oldsmobile at Charlotte on the Wednesday of the event when disaster struck at the exit of Turn 3.

“We had the radio on and I’m going around, keeping my nose clean and sneaking at it,” recalled Grice of the testing session.

“They came on [the radio] and said ‘great stuff, you’ve just done an XYZ, which was right on the pace.

“And I’ve sort of gone ‘bloody hell, you’re kidding, I’m just getting my eye in here, I haven’t really had a crack yet.’

“So to move myself forward and back in the seat to get everything going, because I’m going to have a crack now – because I’ve done that time, and I did it easy – watch this…

“In doing that – wriggling around and moving the harness and everything, I pulled back on the steering wheel and it came straight off. That’s when I had a shunt…

“That was the end of my NASCAR career because I wrote the car off, and it’s very unusual to do that.”

Grice said the nature of the staggered setup on a NASCAR designed to run anti-clockwise around an oval meant there was no chance of saving it, while the fencing design made things far worse.

“It just happened to turn left where they had a gate that used to slide open to let service vehicles across the track,” he said.

“So of the whole inner wall, this was the only place where there was a protruding post – and that’s where I went in.

“It was a good one. I couldn’t hold anything down for two or three days – but didn’t break anything!

“I was absolutely convinced – then and today – that after the lap that I did, I was so in control of that lap, still taking everything in and having peripheral senses and vision, that I could’ve gone another half to three quarters of a second quicker – which is a fair bit around a NASCAR track – which would’ve put me right there.

This week’s V8 Sleuth Podcast with Grice covers a wide range of topics, including how he got started in the sport, his NASCAR efforts in the US and Australia, tackling Bathurst in a Fiat, racing at Le Mans, and becoming a state politician.