Home News MURPHY’S LAP OF THE GODS CAR FOR SALE! 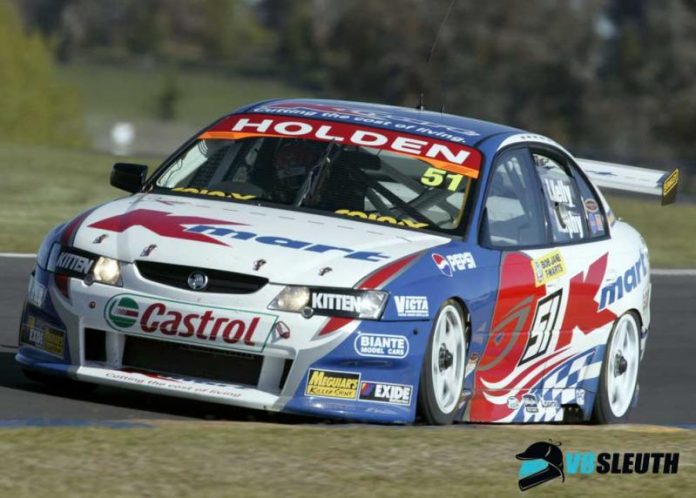 IT turned one of the most famous laps in Bathurst history and created a record that stood for nearly a decade butnow the 2003 Bathurst-winning Kmart Racing Commodore is looking for a new home.

Queensland-based collector John Anderson is seeking expressions of interest for the #51 Kmart Commodore driven by Greg Murphy to his famous ‘Lap of the Gods’ pole position at Bathurst in 2003 that went on to win the race the next day in the hands of the Kiwi and teammate Rick Kelly.

This famous piece of V8 Supercar history was beautifully restored in 2011 back to its full 2003 Bathurst livery and technical specification (VY Commodore).

Originally built by the Holden Racing Team, chassis HRT 043 debuted as a VT in the hands of Craig Lowndes during the 2000 Shell Championship Series.

The car also won the Queensland 500 that year in the hands of Lowndes and Mark Skaife before later becoming a VY Commodore used by Todd Kelly for HRT in early 2003 and then being moved across to the sister Kmart team later that season.

This Commodore’s full history is told in our recently released ‘HRT – The Cars 1989-2016’ book available here in our V8 Sleuth Online Store.

The 2m06.8594s ‘Lap of the Gods’ was set in Saturday’s Top 10 shootout for the ’03 race, with the time standing until practice for the 2010 race when it was finally broken by Craig Lowndes.

Click here if you’re a V8 Sleuth subscriber to read the history file on this chassis.