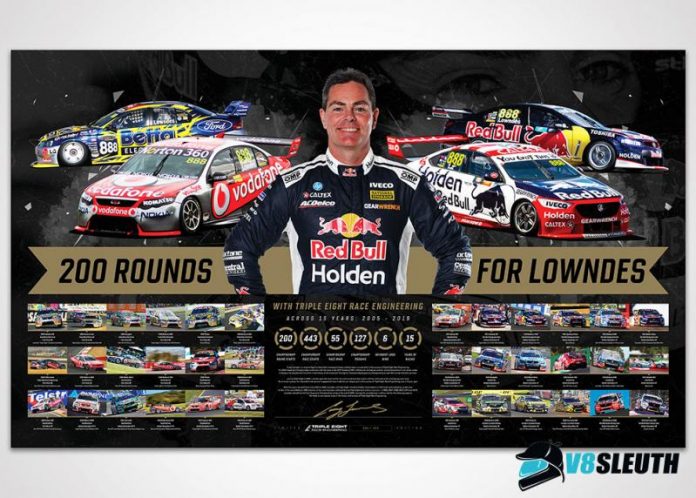 The multiple Bathurst 1000 and championship winner will become the first driver in Supercars history to make 200 championship round starts with a single team.

In honour of the 200 round milestone, V8 Sleuth is proud to release a limited edition collector's print celebrating Lowndes' career-defining period with a team that has dominated the sport for much of the past two decades.

The mammoth print – measuring 1 metre wide – is endorsed by both Lowndes and Triple Eight and features spectacular imagery from across his 15 years with the team, including his six Mount Panorama triumphs driving for the Brisbane-based squad as well as every regular season and one-off livery his #888 car has carried.

Only a limited edition run of these prints will be produced, with each to be individually numbered and signed by Lowndes himself.

This is an amazing collector’s print for Craig Lowndes fans as he celebrates a major milestone with the team he is synonymous with.

Please Note: This print is available to pre-order. To allow for signing we currently expect orders to ship mid/late November 2019.

Place your order to ensure you don’t miss this piece of memorabilia or make an enquiry with your local stockist.