Home News PENSKE OUT, McLAUGHLIN TO INDY AND DICK JOHNSON RACING RETURNS FOR 2021 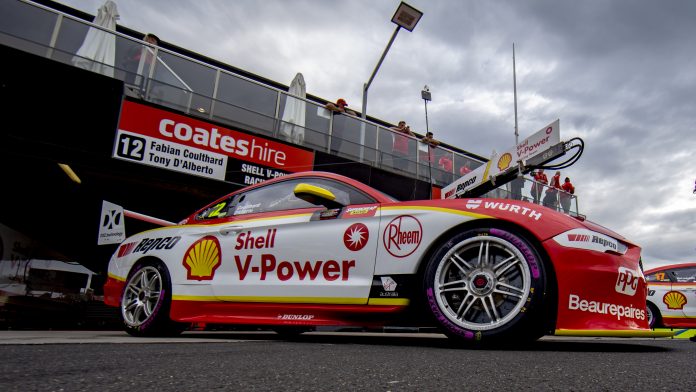 THE Dick Johnson Racing banner will be returned to the Supercars Championship grid next year in the wake of today’s news that Team Penske has elected to divest its ownership stake in the team.

The team will be jointly owned by Dick Johnson and Ryan Story and continue to run a two-car Ford Mustang team in the championship next year in the wake of Roger Penske’s decision to depart.

DJR will continue with a driver line-up expected to be announced in coming weeks.

Will Davison, who drove full-time for the team between 2006 and 2008, is expected to partner Anton De Pasquale in the team’s new driver line-up given three-time and reigning Supercars Champion Scott McLaughlin will head to IndyCar racing in the United States with Team Penske, that news confirmed by Penske this morning.

McLaughlin will return to DJR to co-drive in the Bathurst 1000 next year, a fact also confirmed in today’s DJR release.

Kiwi Fabian Coulthard appears to be out of a full-time seat with the team after a five-year stint with the organisation. His future is yet to be confirmed.

“As we enter the next chapter at DJR, we look forward to what lies ahead for our team,” said team founder Dick Johnson.

“It has been an honor to partner with Roger Penske and everyone from Team Penske over these last six seasons, but we understand the challenges that everyone has faced worldwide in 2020 due to the COVID-19 pandemic. We’re thankful that we were able to conclude our partnership with our third driver and team championships together this season.

“We want to thank Scott for his professionalism on and off the track. He is a generational talent and we are excited he will join us as a co-driver at next year’s Repco Bathurst 1000 in October. We know Scott is in a great position with Team Penske for the future and we wish him all the luck in the world as he begins his INDYCAR career.

“The future is also very bright at DJR. We have truly amazing people in our team – the same people that have been the driving force behind the race wins and championships we have won over the past six years. We also have a fantastic and committed group of partners, who remain in lockstep with us for 2021 and beyond, and some of the most passionate and loyal fans in motor sport. With that kind of support and experience, we are ready to build on our success with the Shell V-Power Racing Team.”

“We have enjoyed an incredible six seasons competing in the Supercars series with DJR Team Penske,” said Roger Penske.

“Partnering with Dick Johnson and Ryan Story to form DJR Team Penske was an incredible experience that produced success on the track and in the boardroom. We have built so many lasting partnerships and friendships and competing in Supercars has certainly helped strengthen our brand and our business in Australia and New Zealand.

“Unfortunately, with the challenges we have faced in 2020 as a result of the COVID-19 pandemic, we have had to readjust our business initiatives for 2021 and beyond. We want to thank Dick Johnson, Ryan Story, Fabian Coulthard and all of our team members for their hard work and dedication as we re-established a championship organisation together over the last six years. I know that Dick, Ryan and the team will continue to build on that success moving forward.”

Penske came into Supercars after buying a majority share of Dick Johnson Racing in late 2014.

DJR Team Penske made its Supercars Championship debut the following year with former champion Marcos Ambrose making a highly publicised return to Australian racing, only to step out after just a handful of events and be replaced by endurance driver Scott Pye.

Since then the team has been a powerhouse, claiming three straight Drivers Championships in the last three seasons with Scott McLaughlin, including last year’s Bathurst 1000 with McLaughlin and Alex Premat, and multiple Team’s Championships as well.

“As DJR celebrates its 40th season in 2021 we’re excited to return to the track next season and continue as Ford’s homologation team, working with Ford Performance on developing the Gen3 Mustangs for 2022,” said Ryan Story, DJR co-owner and managing director.

“We have been proud to work with Team Penske and represent the professionalism, ethics, effort and success of the Penske brand since 2015. We thank Roger Penske, Tim Cindric and everyone at Team Penske for their partnership, their friendship and their guidance.

“Together, we have built a championship team and cultivated an exceptional group of partners that engage on a business-to-business level that represents the very best of any sporting organization in Australia and New Zealand. DJR is in a great position to move forward and we are more energized than ever about the future of our team.”