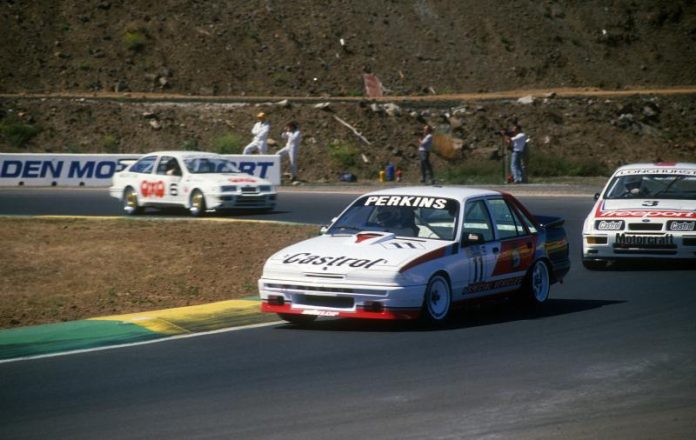 A GROUP A Holden Commodore raced in the World Touring Car Championship by Larry Perkins will make its first racing appearance in 24 years at thisweekend’s fourth round of the Heritage Touring Cars Championshipat Sydney Motorsport Park’s Muscle Car Masters.

The VL model Commodore has not raced since 1990 and is part of a 34-strong field for the category, which features genuine cars from the Group A and C eras of Australian touring car racing.

Owner Glen Featherstone has completed a restoration of the car, which was raced by Perkins and Denny Hulme in the 1987 WTCC rounds at Calder in Melbourne and Wellington in New Zealand.

It later was driven by Perkins in the 1988 Australian Touring Car Championship with Holden Special Vehicles signage, thus becoming the first car to compete under the HSV banner.

Ironically, it will make its racing return at the same circuit where it last raced in major Group A racing at Sydney Motorsport Park.

Four-time Australian Touring Car Champion Jim Richards will return to HTC for the first time since the opening round at Phillip Island in March aboard his 1990 ATCC-winning GTS-R Skyline.

He will be part of a field that features an even spread of 17 Group A and 17 Group C entries.

The Group C numbers will be livened by the return of Western Australian Paul Stubber and his ex-John Harvey, Holden Dealer Team Torana A9X.

David Towe’s ex-JPS BMW M3 leads the Group A HTC Championship clear of the GIO Nissan GT-R of Terry Lawlor and Bill Pye’s ex-Dick Johnson Ford Mustang, which will not compete this weekend.

The Heritage Touring Cars will compete on all three Sydney Motorsport Park circuit layouts over the weekend with a total of six races held for the category.

V8 Sleuth will be trackside this weekend with images, updates and lots more!